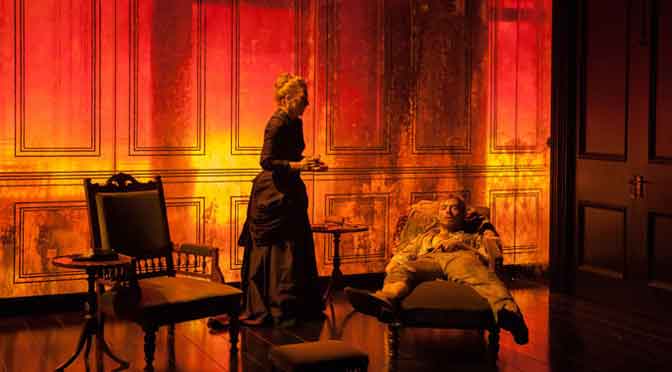 Richard Eyre’s production of Ibsen’s Ghosts has been a long time in the making – he first worked on the script in 2006. It must be gratifying that now it has reached the stage, opening this week at the Almeida Theatre, everything has come together so eloquently. Eyre’s adaptation is superb, his direction impeccable and his cast faultless.

In this 1881 play we encounter one of Ibsen’s many heroines, Helene Alving, a magnificent character whose long-endured marriage has ended and who hopes she is now “learning to be free”. But, while ironically planning an orphanage as a memorial to her syphilitic, drunken husband, she is haunted by her decision to shield his philandering from her son and the community. As Helene, it is difficult to praise Lesley Manville sufficiently.

Helene’s unrequited love for her Pastor, a ridiculously religious figure made credible by the clever casting of the excellent Will Keen, and her desperate love for her sick son Oswald, played with skill by Jack Lowden, makes things grim and grimmer for her. A radical thinker, Helene has us on her side, but the past and society are against her. The Pastor’s restraint and Oswald’s bohemianism, including his incestuous attraction to his half-sister, trap Helene like a pincer. Manville copes with the intensity terrifically, agonisingly building up the pressure.

The play is set in a single room, Helene’s “university of suffering”, created out of ghostly transparent walls by designer Tim Hatley. Sometimes opaque, at others revealing the comings and goings of the servants the Alvings are intimately connected with, it acts as a claustrophobic canvas for some fine work by lighting director Peter Mumford.

Ghosts caused controversy when it was written and Eyre’s adaptation reminds us why. Swift and brutal, you sense Ibsen’s hunger for life and the truth with a ferocious intensity. The heart-rending finale, where Helene faces a moral dilemma about the euthanasia of her son, could easily find you in tears.

Written 4 October 2013 for The London Magazine