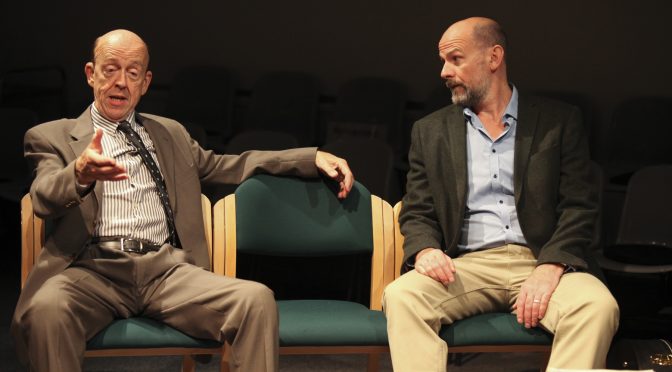 The Print Room has produced another quality show with a revival of Arthur Miller’s The Last Yankee. Casting the spotlight on a pair of husbands visiting their wives in a mental hospital, this short play combines the stories of two very different marriages with a social commentary on the American dream. The production, combining the young talent of director Cathal Cleary and an experienced cast, delivers a great deal in just over an hour.

The performances are ones to relish. Paul Hickey has the strongest part as the carpenter descendant of a founding father, generating sympathy for a proud working man whose efforts to make ends meet frustrate his wife Patricia (captivatingly played by Matilda Ziegler). Their fellow New Englanders are self-made Frick and reclusive Karen, who seem to have it all. Andy De La Tour and Kika Markham make a fantastic team in these roles, forming the play’s emotional backbone as an elderly couple facing frightening problems.

Miller’s idea that money and status have become too damagingly connected is forcefully written and respectfully presented. Arguably, too much has happened in America in the 20 years since the play was penned for these concerns to overly interest an audience in Notting Hill in 2013. But even when Miller’s allegory pushes against credibility (in particular the suggestion that Patricia is punishing her husband by having a break down), human drama is to the fore. The performances focus attention on the pain of mental illness and there are heart-rending moments that make it easy to recommend this show.

Written 16 September 2013 for The London Magazine