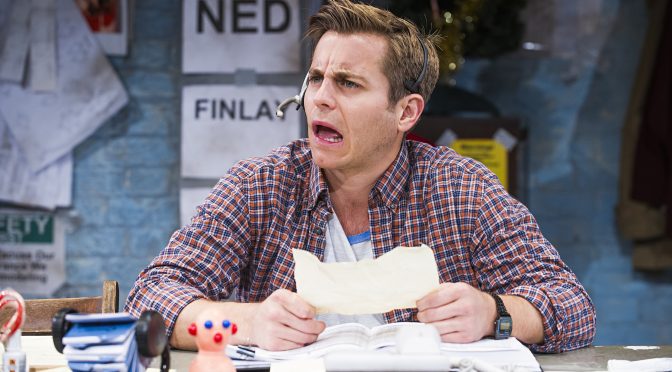 A most disappointing show at the usually excellent Menier Chocolate Factory, Fully Committed by Becky Mode is a comedy set in a successful restaurant. In America, Mode’s play was as big a hit as the restaurant she bases it in, which is booked out – fully committed in the chef’s jargon. If you’re a VIP or willing to bend the rules, you can get a table. As for getting a theatre ticket, only bother if you want something very light.

Forefront at the battle for a restaurant reservation is our hero Sam, who mans the phones and deals with the frankly freakish clientele. Kevin Bishop is on the stage alone, performing not just as Sam but all the callers he answers the phone to and the staff he communicates with via intercom. It’s a neat, simple idea, perfect for a one man show and entertaining enough, but there’s little substance here; in fact it’s so thin, it’s anorexic.

Worse than the lack of plot, Fully Committed is lazy. Not Bishop’s performance, which is highly energetic and pleases the crowd, or Mark Setlock’s direction which is clear and precise, but the text lacks surprises and has poor characterisation. The snobbery and pretention at the restaurant can all be predicted, as can any small amounts of satire. There’s an authentic feel, in fact I suspect it could have been more exaggerated, but this is in-joke for out of work actors or those that dine out expensively.

A good sitcom will provide considerable emotional investment in its characters – such interest is lacking in Fully Committed. Sam is as weakly written as the people on the other end of the phone line – likeable, just about, but simply not interesting enough. Sam becomes more confident when he might get an acting job; he even becomes rude to the obnoxious chef. Oh, and he gets to go home for Christmas… but that’s all.

The humour comes from Bishop who is skilled and switches accents with speed. But these are impersonations, some of them good and the quantity certainly impressive, but many just silly voices. There are laughs but nothing that stays with you and an over-reliance on racial stereotypes that’s a little tasteless. So while it’s impressive that the phone calls keep coming, there’s little momentum, nothing to get your teeth into and very little bite.