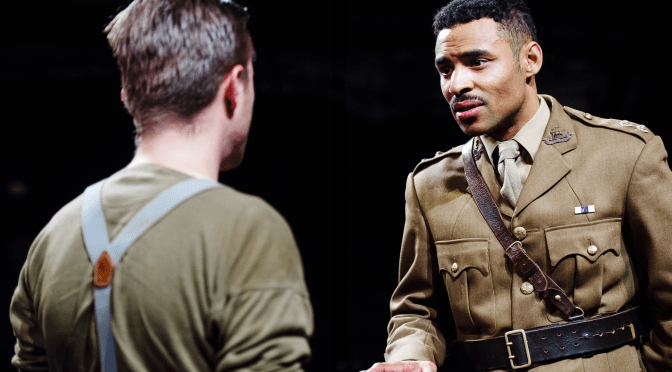 Dilated Theatre’s production of John Wilson’s 1964 play is timely in two ways. The story of a soldier on trial for desertion, it’s a thought-provoking commemoration of World War I during this anniversary year. And, since hindsight tells us many such cases were surely victims of PTSD, staging the play at a time when awareness of mental health is increasing means that a pretty standard court room drama provides input into a topical concern.

The play stages a conventional legal battle, but one that is well written and that director Paul Tomlinson does justice to, with some flashbacks of fighting to inject energy and well-used music. Extra tension comes as defence lawyer Lieutenant Hargreaves plays the “dangerous game” of defending Private Hamp, who left his post, although he has no explanation of why. Will the case save a life or set a precedent that will damage the Army and the war effort?

The lead roles make excellent showcases. Lloyd Everitt is the perfect English gent as the sensitive advocate with a stiff upper lip. And Adam Lawrence, who plays Hamp, carries off the tricky job of making him believable. There can’t be many people so incapable of lying. There’s a fine ensemble, each of whom Tomlinson gets solid work from, and just enough nuance for each character.

One thing that is different about the piece is the role of religion, with faith a questioning force for good that matches Hargreaves’ more secular viewpoint. Indeed, religion takes over, becoming a genuine moral compass that orientates the play. It’s a lot for Eugene Simon in the role of the Padre to shoulder, but he puts on an impressive show, adding plenty of emotion to the arguments and power to the text’s most original feature.