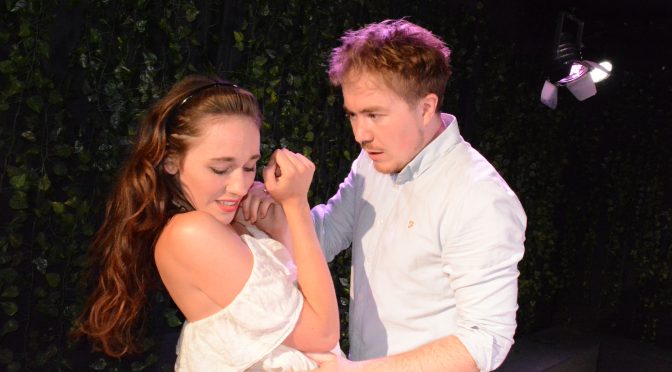 As the recovery of lost classics go, director Graham Watts’ new production is a coup. Written by the fascinating Margaret Cavendish in 1662, and only now receiving a première, it should be on a ‘to see’ list for anyone interested in theatrical history as well as writing by women.

The play itself is more than a little mad. There are two tales that create a bizarre mix, presented in short scenes that make the play feel startlingly modern. There are the unhappy marriages of Monsieur Malateste: first to his “good natured wife”, obedient to a fault, then with his viduity ruined by a new free-spirited partner. The latter provides a fascinating part for Madeleine Hutchins in fine comic form, and manages to deflate the rather didactic tones that prevail. Then there is an incestuous affair between a brother and his reluctant sister, with strong performances from Jack Ayres and Alice Welby, as full of argument as angst. So we have a Restoration comedy, of sorts, butting against a spin on Jacobean tragedy (with suicides rather than murders) in a mashed-up fashion that the bravest of post-moderns would quake at.

It gets stranger. A group of “sociable virgins” discourse between scenes, forming a kind of single-sex Decameron, overtly playing with ideas on gender, politics and art. Questions about natural law versus society are never far away throughout the play and it is hard not to view them as heavy-handed. It’s testament to Watts’ skill that these scenes play so light – presenting the virgins as schoolgirls is the most obviously clever move. Hutchins and Phebe Alys cross over into the main stories, but their companions Lily Donovan and Eleanor Nawal also manage to impress in these scenes. Oh, and two narrator characters join the audience to debate, yet further, opinions on marriage and whether a woman can write a play! Again, credit to the performers who see how engaging the scenes should be; Charlotte Monkhouse and James Sanderson do an excellent job here and with the other roles they are called on to perform.

With plenty of peculiar (dare we say flat?) roles, Watts shows his formidable skills. Handling the eccentricities of the text is truly expert. The disturbing passions, so well portrayed by Ayres and Welby, are made chilling. Cavendish’s wit is clear enough, but Watt’s coaxing of the humour still deserves praise: he brings out the drollery not just with well-applied modern touches, and clever framing of scenes, but by engaging with the arguments respectfully. All in all, an intelligent production of a difficult piece so crammed full of incident and intellect it needs to be seen to be believed.