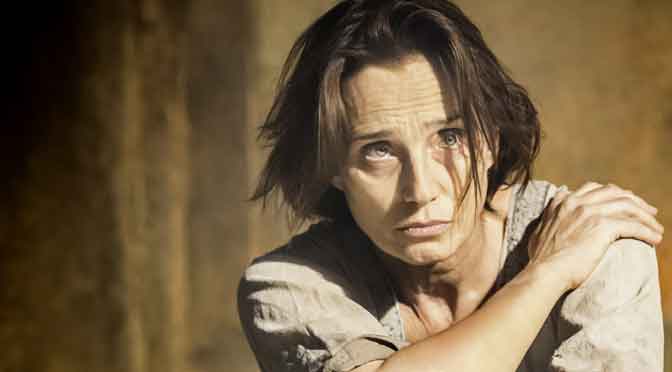 Frank McGuinness’ version of Electra is currently playing at the Old Vic. Directed by Ian Rickson, with satisfying confidence, this no-nonsense version of Sophocles’ tragedy, about a daughter’s revenge on her mariticidal mother, is direct and powerful.

This is a fine production with Kristin Scott Thomas in the title role. She’s the star attraction, but it should be stressed that the whole cast is strong. Diana Quick is suitably regal as the detested mother Clytemnestra and Jack Lowden gives a moving depth to Electra’s prodigal brother Orestes.

Hauteur has been a career specialty for Scott Thomas and, since Electra is a princess, it’s used to advantage here. But this is a remarkably earthy performance, free from vanity and physically charged. She is dynamic, pacing around as if caged. Even when on the ground, little of her body touches the earth. Convulsed with grief, every muscle is expressive. And animalistic: her centre of gravity is low and every sense heightened to suggest a hunted figure. This intimation of the feral doesn’t disappear with a cry of joy as Orestes reappears – Electra sniffs her brother as if to confirm that he is one of her brood.

As well as its easy appeal, McGuinness’ text gets to the heart of the tale with efficiency. Along with the horror of the story, dilemmas are presented cogently with an emphasis on religion that Rickson develops.
Quick and Lowden both represent the questions surrounding their bloody family legacy well. The urgency of Electra’s need for justice, which creates a manic “fire in her head”, is balanced with cogent arguments, delineated by Scott Thomas with eviscerating intelligence.

Written 8 October 2014 for The London Magazine