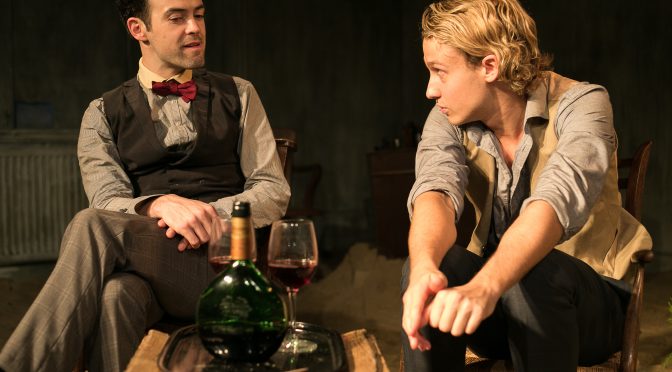 Former theatre critic Nicholas de Jongh’s second work, The Unquiet Grave of Garcia Lorca, is currently playing at the charming Drayton Arms pub theatre in South Kensington. As with De Jongh’s first piece, Plague over England, which gained a West End transfer, it explores an event in history through the fate of a gay icon – this time the Spanish Civil War and one of Spain’s most famous writers. You can’t doubt the play’s ambition, and the subject matter is interesting. Unfortunately, the work will disappoint many with its confusing structure, pretentious touches and poor performances.

The identity of Lorca’s last, secret lover was only revealed in 2012 and The Unquiet Grave of Garcia Lorca looks at the impact this romance had on the young man, Juan Ramirez de Lucas, both at the time and in his old age. De Jongh seems swayed by his journalistic past into using the topical peg of a recent discovery. Sadly, the decision to finally tell the story to the world isn’t as interesting as what actually happened.

Switching between the past and present shouldn’t be as confusing as this production makes it. Even worse, interaction between Lorca and Juan feels truncated, while a scene with Lorca in prison ends up more bizarre than weighty. Matters are further complicated by an examination of Britain’s involvement in the Spanish Civil War. This is interesting enough to be a play in its own right, but is reduced to a blatantly superfluous opening scene where a British couple discover Lorca’s body in the grounds of their holiday home.

Working out what to make of De Jongh’s play is tricky; the raw material is promising but Hamish MacDougall’s direction makes little effort to aid clarity. There are good performances from Damien Hasson and Matthew Bentley; a convincing Lorca and intense Juan who work well together. However, the other performers seem woefully lost. It’s unusual to see such a low standard of work on London’s fringe, and vaguely embarrassing. Lorca would be more than unquiet in his grave – he would be spinning in it.

Written 5 October 2014 for The London Magazine