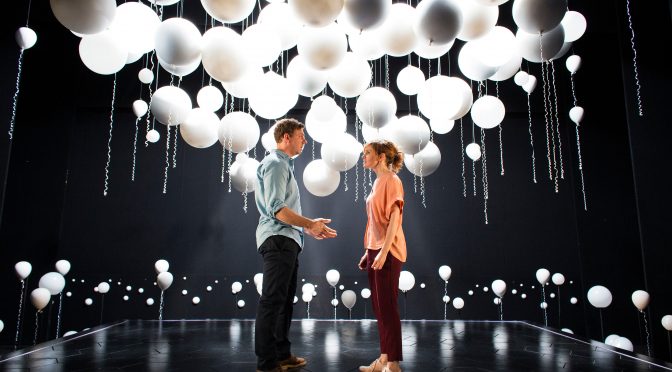 One of the strongest plays written in recent years, Nick Payne’s Constellations continues its huge success with Michael Longhurst’s impeccably directed production finishing a nationwide tour in the West End. If you haven’t already seen the play, then you must go. If you have seen it, you shouldn’t need persuading to go again.

This mind-bending romance, full of laughter and tears, explores theoretical physics and the concept of the multiverse – where every action, or inaction, creates infinite parallel realities. I’m not saying I fully understand the theories, but what use the script makes of this scientific speculation is remarkable – repeating lines in short scenes to show altered situations and outcomes.

Roland and Marianne, whose lives we follow, start or don’t start a love affair, which runs both smoothly and unevenly. The changes in situations are funny – especially at a first meeting or a chance reunion at a ballroom dancing class – an exhilarating mix of intelligent humour and belly laughs. But running through the play is Marianne’s illness, a heart-wrenching memento mori explored with such sensitivity and originality it is inspiring.

Payne’s writing is a gift to an actor. Taking on the roles of the couple who do and don’t get together, do and don’t betray one another, affords brilliant opportunities to show off skills and allows Joe Armstrong and Louise Brealey to shine. Armstrong has instant appeal – his beekeeping character wins your heart. Brealey’s performance has more variety, moving back and forth from gawkish scientist to a somewhat cold, cynical figure. When it comes to her character’s illness, she is magnificent. I remember crying when I first saw Constellations and it happened again as Marianne is forced to communicate via sign language in a brave and brilliant scene.

Constellations is an excellent drama and an hilarious comedy, but just as exciting is the way Payne has made questions of life, love, death and morality central to the theories he explores. This multiverse is far from abstract when it comes to the issue of Marianne’s euthanasia – what those white coats have been working on has implications for us all.