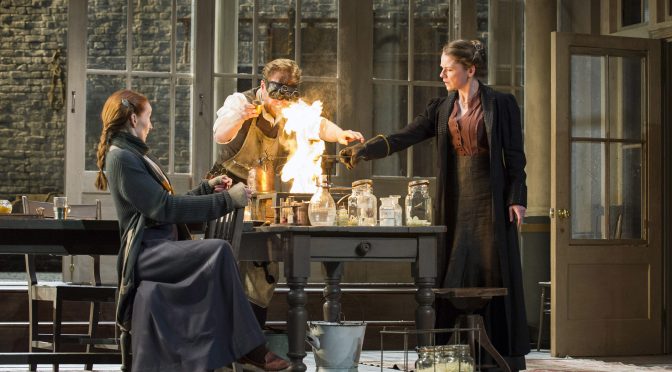 One of the many creative teams who have contributed to recent successes at the National Theatre, director Howard Davies and writer Andrew Upton – whose reputation rests on a series of adaptations of Russian classics – are back with Children of the Sun. Maxim Gorky’s play, adapted and directed with justified confidence, is fresh and vital. Also re-collaborating, designer Bunny Christie has created a stunning set that makes the most of the National’s Lyttelton stage.

A perceptive psychological drama about the “fools and idiots” in and around one family, there are love affairs galore in Children of the Sun. Intense Russians might be a cliché in hands less skilled then Upton’s, but here the morbid emotions and high-flown ideals engage. The diverse characters are so well drawn and developed that the actors can truly embrace their roles. From the “great nanniness” still living with this distinctly infantile family, played by Maggie McCarthy, to the man ostensibly in charge as head of the family, Protasov (Geoffrey Streatfeild), the cast is uniformly impressive.

More than a moving family drama, Children of the Sun abounds with issues as well: it questions the role of art and science and the nature of society. Gorky the commentator, very much of his time, seems relevant with Upton on board. Hindsight is used but, thankfully for the drama, it feels as if anything might happen. The privileged Protasov is a scientist so obsessed with work that his family and the whole village suffer. The intelligentsia, to which he belongs, feel they are battling superstition – but you can’t blame the locals when it turns out they are being poisoned by his experiments. The play’s bloody, depressing conclusion shocks and stirs. The characters’ fates and the broader questions Gorky raises make for an explosive mix.

Written 20 April 2013 for The London Magazine