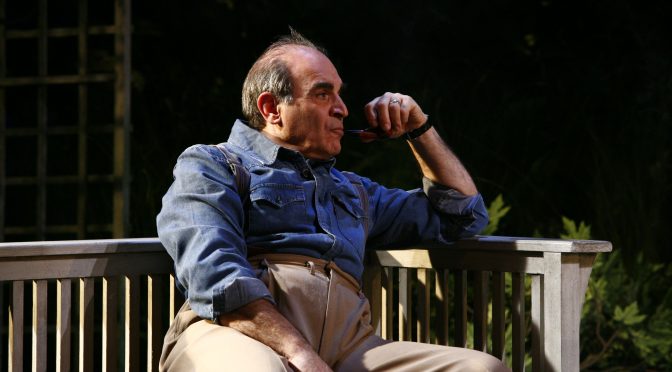 Now is a good time to revive Arthur Miller’s 1947 masterpiece All My Sons. The story of a war profiteer whose faulty goods killed U.S. airmen, is so full of moral dilemmas that it is always entertaining and powerful. But currently, as corporate responsibility is in the news and questions of social justice become vital in our increasingly divided society, All My Sons has become more important than ever.

This summer, at the Apollo Theatre, All My Sons gets the production it deserves. William Dudley’s beautiful set wins you over before the action even starts. It is the perfect stage for what at first seems to be a homely drama. In the skilful hands of director Howard Davies, this is developed into a perfect mix of touching domestic tension and complex politics expressed with intellectual vigour.

The dual concern for both family matters and society as a whole is also well expressed by the uniformly brilliant cast. Stephen Campbell Moore plays Chris Keller – having survived the war he is now in the position of taking over the family business. A devoted son and noble man, he wishes to marry his dead brother’s sweetheart – Jemima Rooper gives a superb performance in this role. Desperate for love and sharing high principles the couple are haunted by mistakes and lies that began long ago.

Chris’s parents, Kate and Joe, are presented first as a devoted older couple, so comfortable together that they share mannerisms and know each others thoughts. We come to see they are also linked by the lies they tell each other and the world. Zoë Wanamaker’s fragile Kate is hard as steel underneath. David Suchet as Joe, has the slightly harder job of showing the opposite – a genial father figure who is a mess of nerves deep down. Both actors are impeccable throughout.

Kate and Joe have a “talent for lying” and this is where the performances become truly remarkable. A frightening conviction is revealed when their backs are against the wall. Right up until the end both of them seek to control and manipulate. These are technically wonderful performances but there is even more to it than that. Wanamaker and Suchet’s skills have a purpose, their craft is well applied and functions to bring home Miller’s message. Together, they make this the play you simply must see this summer.

Written 3 June 2010 for The London Magazine