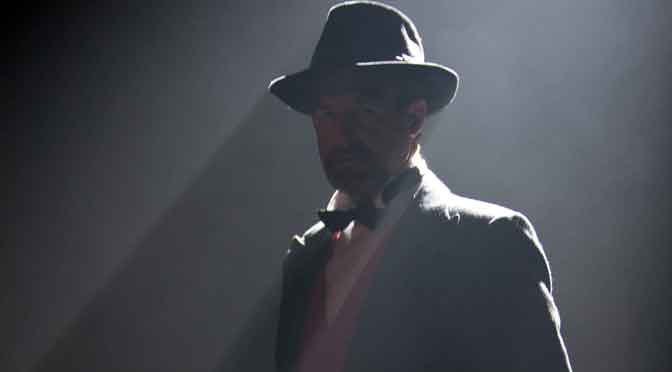 The latest attempt to scare London theatregoers out of their seats is Afraid of the Dark, which opened last night at the Charing Cross Theatre. I chickened out of Ghost Stories but always recommend The Woman in Black, so consider myself open-minded about scary shows. Afraid of the Dark didn’t make me jump much – you wouldn’t bother daring someone to see it – but it’s perfectly diverting.

Intriguingly penned by Anonymous, the play’s various scenes of suspense circle around an old Vaudevillian magician who delights in scaring the wits out of a B-movie producer and his minions. Julian Forsyth takes on the role of ‘Master of Terror’, Dr Henry Charlier, with nice prestidigitation. And those he terrorises at the film studios (by giving them an envelope predicting their darkest fears) ham it up in appropriate fashion. Rebecca Blackstone’s screams are great and Mark Rice-Oxley tries hard to shed some light on his character’s motivation. None of the actors has that much to work with – characterisation isn’t the point after all – and nor is the plot trying to thread them together up to much. But there’s a good sense of humour here and some neat touches.

What impresses is the show’s production team. Effective light and sound, along with illusions from Darren Lang, reveal this to be a magic show that is entertaining rather than eerie. The stories are made the most of with technical expertise as well as some lo-fi touches that receive eager applause. Just like the movie producer looking for the next gimmick, Afraid of the Dark shows that cheap touches can work well. The real thrill comes from experienced director Ian Talbot who has more than earned his fee here. Consistently tense and swiftly paced, this play is more fun-filled than fear inducing.

Written 12 September 2013 for The London Magazine