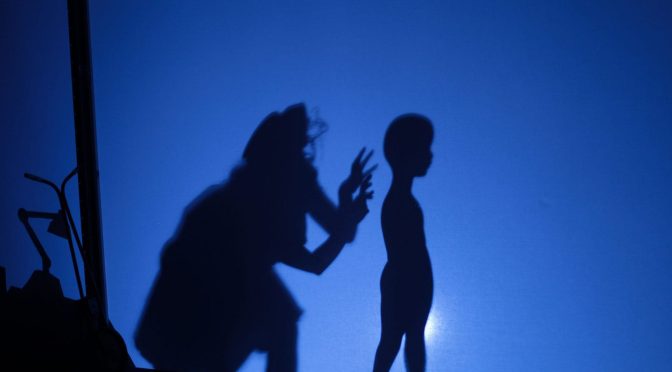 Theatre happens in all kinds of places nowadays, so a disused Print Works as a venue is voguish rather than outlandish. But walking through a massive council estate on the wrong side of Hoxton at night made your theatre critic feel distinctly intrepid. Thankfully, the Dirty Market theatre company has transformed an old factory into a playground to host its new show, Oxbow Lakes, in association with the Camden People’s Theatre. A work devised by the company, using the perspective of a child, it’s a charming, dreamlike jaunt through some wild scenarios.

A young child’s fears, reflecting the anxieties of his parents, Jack and Jill (Georgina Sowerby and Jon Lee), with plenty of transformations set in a deep, dark wood create a rich backdrop for imaginations to wander through. Puppetry, fabric sets, jumble sale costumes and fairy-tale characters, ably performed by Francesca Dale, Arti Natharni and Benedict Hopper (who has the evening’s funniest scene when he takes on the roles of both Queen Bittersweet and Prince Lemonzest) combine to create a simple, storytelling world that it’s a pleasure to dip into.

There’s also a good deal of music, composed and performed by the show’s narrator Oscar Gibbs. It’s easy to see the appeal of the songs’ lo-fi approach and poetic lyrics. And there’s an element of mystery, as bodies pile up around the eponymous lake, with a nod to Twin Peaks, and a Sarah Lundish detective (pictured above) who raises a smile. It may not quite hold together, and the inspiration – that some people find their children to be little devils – doesn’t have much drive – but it’s all monstrously good fun.

Written 6 September 2013 for The London Magazine