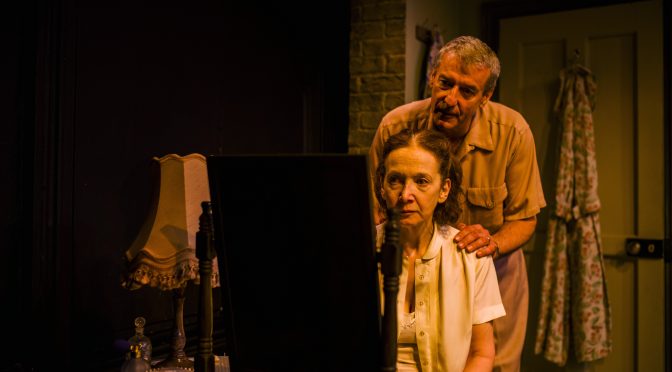 Janet Suzman’s revival of South African master-playwright Athol Fugard’s 1978 play is a masterclass in direction. There’s plenty to learn from this play about political activists suffering under the Apartheid regime, while Suzman’s sure hand is theatrically educative. And, although enjoyment can’t be said to be an aim of the piece, the performances prove gratifying despite the bleak content.

Dawid Minnaar and Janine Ulfane play a devoted couple, Piet and Gladys, whose lives have been traumatised by a visit from the security forces. Minnaar makes Piet a noble figure, possibly to a fault, and skilfully carries us through a deal of poetry quoting, potted personal history and philosophising on plants that might have dragged in lesser hands. Ulfane’s role as the prim and proper wife who has suffered a breakdown is more interesting. Intense from the start, Gladys’s anxiety only lets up when she shows a shockingly vicious streak. The character’s fragility weighs heavily on the play – it comes close to exhausting – but Suzman and Ulfane refuse to back down.

Most of the play is spent waiting for the arrival of Piet’s friend and political comrade, Steve. Suzman’s pacing is superb; that the couple are “flattering time with too much attention” is palpable yet the momentum is swift. Steve’s arrival, after the show’s interval, brings further energy and another strong performance, this time from David Rubin. The news of his approaching exile to the UK and the spectre of a police informer who played a part in his imprisonment provide further dynamics to puzzle over, while Rubin generates care for his character with remarkable speed.

A Lesson from Aloes is a play of ideas and emotions that may prove too static for some tastes. But, for a precise look at people under pressure, and a detailed insight into history, it is admirable. Fugard’s control of theme and plot are matched flawlessly by Suzman. And ideas about home, hope and hell, all of which can teach us much, are presented to perfection.