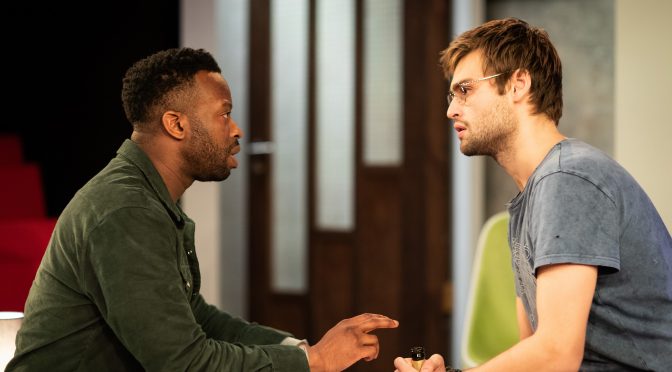 There’s a good story within Ken Urban’s play. Bear with me, as the opening isn’t promising: a one-night stand between two men in a foreign city who begin to reveal their dark secrets. As you might guess, it’s contrived, predictable and a little silly. But, as themes of betrayal are exposed, the fine line between friendship and romantic love is explored. As the play develops to include a global look at LGBT rights, it gets better and better.

The two main characters here are not appealing. It’s not that they’ve done anything bad, as becomes apparent all too quickly, but because their privilege brings their remorse perilously close to indulgence. Maybe Urban is making a point here? The characters ring true enough, their virtue-signalling as empty as any cynic might wish. But their self-obsession borders on the incredible. It takes two fine performances to flesh the characters out.

It’s easy to see the roles’ attraction for both Clifford Samuel and Douglas Booth, who take the parts of Teddy and Jeremy, respectively. Under the careful direction of Jonathan O’Boyle, they excel. Both are careful studies: Booth’s character is full of nervous energy and Samuel’s a false confidence. Better still, the backstories of the men who now haunt Teddy and Jeremy mean switching into new roles – accomplished in fine style. Booth has a good line on tortured mania, while Samuel is stunning as a happy man whose life is destroyed.

It is the stories of these other men, Nicholas and Eddie, that are really interesting. We need to know more of Eddie’s mental health, not least how this relates to Teddy’s feelings for him. And it would be good to explore Jeremy’s motivations for becoming an aid worker in Africa more deeply. But the plight of Nicholas as a gay man in Uganda, which is where most of the play’s impact lies, makes A Guide For The Homesick an urgent call to action. The role of the American right in the rise of homophobia is mentioned more than once and the questions of responsibility that fill the play become forceful. There’s an uncomfortable balance between the two traumatic stories, while both make the angst of our moaning main protagonists pale. Again, how much Urban intends this highlighting of first world problems is an open question, but it’s a fascinating one that, after a false start, makes the play one to ponder.