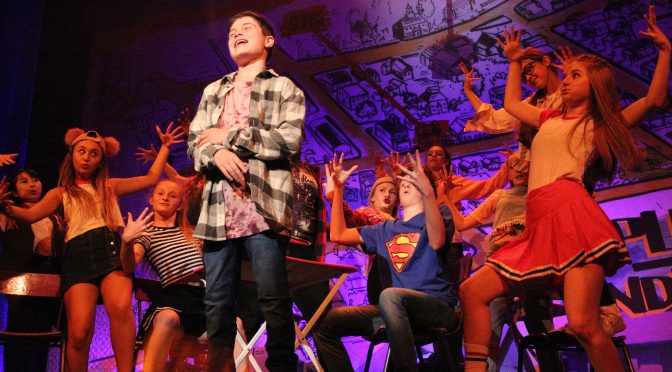 Performed by students of the British Theatre Academy, this musical about turning 13 has the distinction of featuring actors who are all that age or less.

Director and choreographer Ewan Jones has shaped his young charges expertly and all involved should be proud of their professionalism. I couldn’t spot any fumbles – let alone nerves. Even the most obvious failing is charming: the children haven’t entirely learned to deal with an audience’s response and don’t take account of frequent laughter or riotous applause.

The show itself, with a book by Dan Elish and Robert Horn, uses standard school drama tropes and coming of age lessons. New boy Evan, a huge leading role for the talented Milo Panni, has to work out which group he belongs to, with the added pressure of organising his bar mitzvah, while learning about himself – and love – along the way.

The Academy wasn’t taking the soft option when it chose this age-specific piece. The lyrics are ambitious, the musical genres wide referencing. These songs are not easy to perform. Unlike most musicals for younger voices, fewer songs have support from the whole cast, and there are no adults to carry numbers. It is a struggle for some, and the different maturity of boys and girls is noticeable: Chloe Endean and Isabella Pappas, competing for romance with the school jock, are more advanced vocally, and Madeline Banbury, as Evan’s love interest, shows stand-out acting skills.

The best reason to choose the show is that it is from musical mastermind Jason Robert Brown – any opportunity to see his work should not be missed. Showing his usual wit and intelligence, his strong collection of songs will please any age group. The majority are funny, with jokes for grown-ups that add appeal (the school in question is Dan Quayle Junior High). The show is warm, open and inclusive – qualities Jones appreciates perfectly. There’s no patronising audience or performers here, which makes this a production that’s good for more than the family and friends of its talented cast.