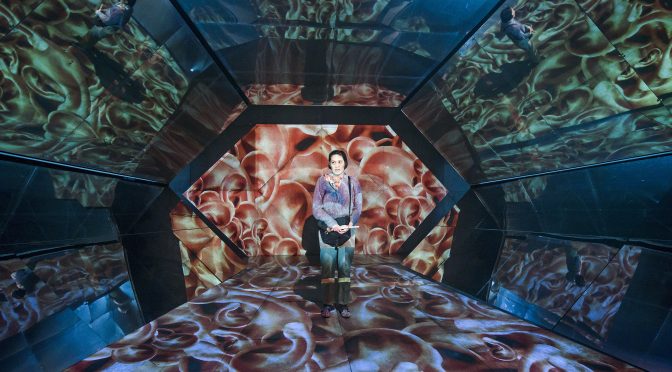 American playwright Mia Chung’s work, for the Royal Court’s wonderfully intimate upstairs auditorium, is the tale of two sisters, Minhee and Junhee, who try to defect from a North Korean regime so sinister it is rendered surreal.

Minhee fails, becoming trapped inside a well, beginning a bizarre journey inside her own consciousness and the national identity that has psychologically entrapped her. Wendy Kweh gives a convincing performance as a tortured soul.

Brilliantly visualised and staged by designer Jon Bausor and director Richard Twyman, a vault-like stage with mirrors and projections creates a visual kaleidoscope of action and paranoia. There’s even a bunny rabbit hanging around.

As a technique for understanding the despotic state, the magical realism employed fits well with Chung’s observations on time. You might feel the need for more raw data about North Korea (although that’s hardly the playwright’s job), but the bureaucratic nightmares experienced are depressingly predictable.

Junhee’s experience is only slightly less fantastical, and America becomes a subject for Chung’s play, as she ostensibly explores the ’other’. The electrifying stroke is to show the experience of learning English – encountering Daisy Haggard in a variety of roles –moving from speaking gibberish to gradually becoming comprehensible. The technique allies us with Katie Leung’s powerfully performed Junhee, while Haggard gives a literally breath-taking performance.

A fast-paced play, this sibling story doesn’t move as much emotionally as it might. Maybe the sisters’ devotion is taken too much for granted. Possibly Minhee’s tragic backstory is revealed just a little too slowly. But the production is superb and the play highlights the desperation of refugees, from anywhere in the world, with more than its fair serving of poetic moments.