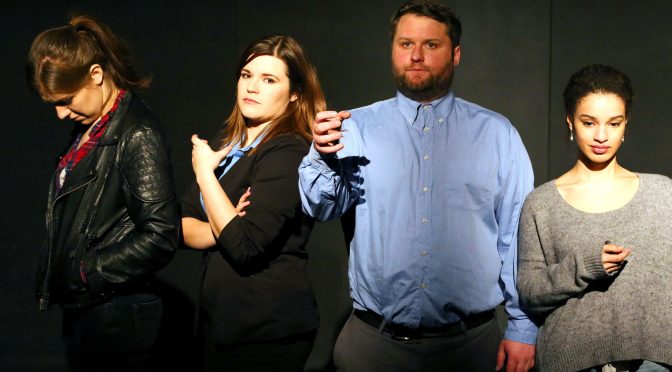 The four different jobs mean everyone in the audience can quickly identify with a character. There’s a high-flying MP and a wealthy banker who live for their work. Their grasping ambition and thoughtless cynicism are expertly depicted by Nicholas Stafford and Emily Bates. Next is an aspiring singer-songwriter called Kirsty, who works in a Job Centre – a role Miranda Evans makes easily recognisable. And finally there’s an actress (sorry, ‘Theatre Practitioner’), who’s happy on the dole while she works on what she really loves. We’ve all seen her type having coffee at the Young Vic and Laura Pieters tackles the part superbly. So there’s material aplenty for lots of laughs and all is well delivered. But what impresses most is Ross’s even hand: nobody escapes his wit, and you may find your allegiances shift from the character you originally warmed to.

The play is perfectly formed, which is not to say it’s easy to deliver. Director James McKendrick juggles the ideas and the action expertly. He injects the energy a show of talking heads needs, mostly via lighting design and, while there are a couple of stumbles due to the fast pace, McKendrick is right to keep the speed vigorous. Arguably, the play’s dark humour isn’t fully plumbed with the role of Kirsty – the break-up with her boyfriend is potentially comic – but all four performers do justice to the complex rhythm of the piece.

There’s a fifth job to consider – that of the playwright. A delightful twist, playing with meta-theatricality, confirms Ross’s mastery. Connections between characters form cleverly revealed plot points, with topical content on trolling and mental health, and a lot of broken dreams that make the play quietly moving. Alongside all the fun, this is a political play of great maturity. There’s a fiery anger at the stupidity and hypocrisy of shaping our identity around what we do, provoking thoughts that labour away long after the work on stage is over.