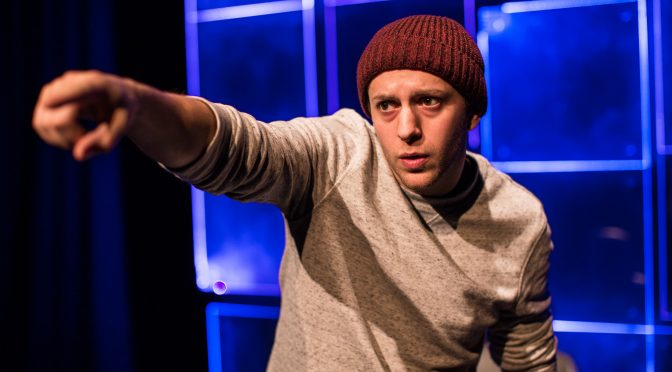 Given its depressingly topical subject matter, it feels obligatory to reveal the plot of Alex Packer’s assured debut play. Which is a shame, since getting to know its protagonist, and following him to an unexpectedly harrowing end, is a cleverly plotted journey that’s well executed. This is a strong one-man show with a performance from Mark Conway that’s well worth watching. But not everyone wants to see a play about violence, misogyny and mental health, all of which qualify for trigger warnings.

So, with another spoiler alert – because the gradually revealed surprise is the best thing here – this is a tale of a loner college student on a murderous campus rampage. Conway takes us from sympathising with the character, to worrying about him, then being afraid of him. Encouraged by Anna Marsland’s skilful direction, we often cringe with, but also laugh at the future mass murderer, as if conniving with his bullying. And attempts by his best friend prove futile, raising questions of how tolerant and capable of assisting any of us would be. It’s a shame this dark sense of complicity isn’t pushed further.

The role of social media, to both humiliate and validate, is rightly explored by Packer but it comes too close to providing an explanation for subsequent behaviour – too easy. Introducing internet pornography and computer gaming is predictable and any connection to what happens is at best risible, at worst lazy thinking. When it comes to gaming, some poetry is introduced – a nice idea that doesn’t quite work but further confirms Packer’s potential. Yet, ultimately, our nameless subject is a little too naïve, especially as a college student. Conway and Marsland make all this compelling to watch. But the character is reduced to a specimen observed and finally, too comfortably, removed from us.