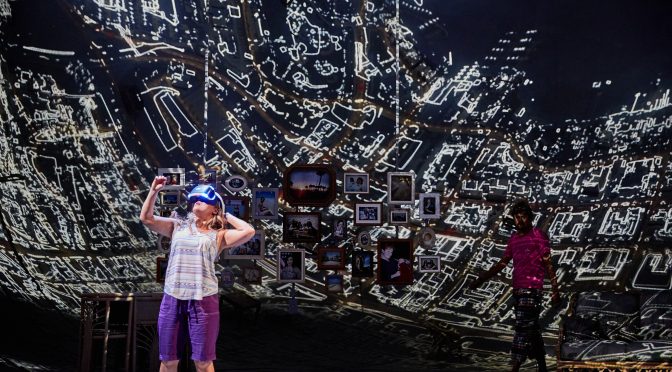 Lindsey Ferrentino’s plays have received plenty of awards and, having worked for the Roundabout Theatre Company and The Public Theatre in New York, she is no stranger to prestigious venues. Still, it must still be an exciting coup to have your UK premiere on the South Bank, and surely her work has much to commend it, but it’s a shame this lacklustre piece doesn’t live up to the honour.

The scenario is powerful, a wounded war veteran returning home. The treatment includes artificial reality – the idea is to shock the system into forgetting horrific burns – so reaching for designer Es Devlin’s number, given her work on The Nether, was a sensible move. Devlin has delivered the goods, with projections on to an impressive set that’s part infinity cove and part model town.

Ferrentino’s characterisation isn’t bad, either. There’s the strong lead role of Jess for Kate Fleetwood – a flawless performance – whose indomitable spirit is saved from cliché by an edge to her humour that could have been pushed further. The men in her life seem pretty scrappy by comparison, but the roles allow Ralf Little and Kris Marshall to show some good comedy skills. Yet so overpowering is Jess’s part that, along with the character of her sister (another superb performance, from Olivia Darnley), the play feels as if it should focus on them, yet doesn’t quite manage to do so.

There are too many false starts around. The medical advances used to treat Jess are interesting, but explored superficially. Hearing but not seeing the scientist pioneering the treatment (Buffy Davis) is novel but alienating and starts to become dull. The time and location of the play – the end of the space shuttle programme in the midst of war in Afghanistan – could give us more pauses for thought but any claims or insight about either are lost. We fall back on a solid human-interest story that ticks along too slowly. Director Indhu Rubasingham does little to add pace, resulting in a disappointingly pedestrian evening.