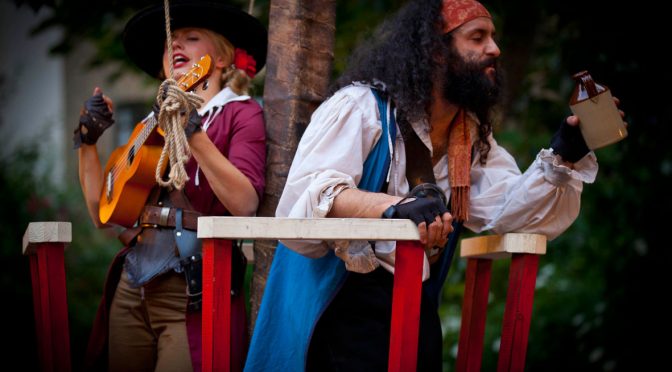 A little damp weather can’t harm Iris Theatre’s ship-shape and extremely jolly adaptation of Robert Louis Stevenson’s classic adventure story. Ambitious sets by Valentina Turtur have taken over St Paul’s church and grounds, while a score from Candida Caldicot breathes further life into this fine children’s show. Eight and above is the recommendation, but parents have a strong chance of enjoying it just as much as their kids.

Director and adapter Daniel Winder’s clever move is to split the audience into privateers and pirates. A brave number of scenes feel like private affairs. While some of the audience battle it out on the good ship Hispaniola, another group mutinies by ambushing the Admiral (a superb Nick Howard-Brown). You’re either in or outside the stockade for a parlay, then you’re solving clues to find treasure or plotting to petrify the pirates. The gardens buzz and I wouldn’t be surprised at demands for return visits to see the other side of the story.

With this clever structure, it’s plain sailing for such a talented ensemble. Dominic Garfield is a suitably hirsute and downright dastardly Black Dog. Dafydd Gwyn Howells a swivel-eyed Long John Silver who’s as camp as you could wish. There’s a strong professional debut from Harold Addo as our hero, Jim. Anne-Marie Piazza wows for a second time this season as the indestructible Isabella Hands, an updated nod to the tradition of female pirates.

There’s just enough humour for the grownups and a big dose of audience participation for the kids, handled perfectly by the cast. Winder makes light of the “ticklish work” of finding treasure, steering clear of Disney by highlighting superstition on the high seas, pointing out just how much grog was swilling around and doing justice to Stevenson’s cynical look at class structure on board the ship, all the while expanding everyone’s pirate-related vocabulary with great skill. Yo-ho-ho and huzzah!