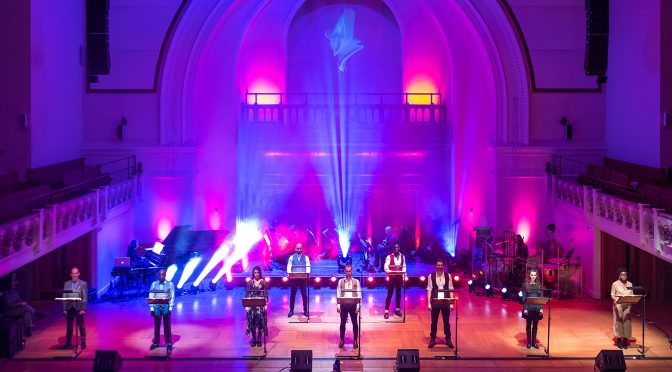 Talented performers have been assembled for this concert version of Ricky Allan’s new musical. The singing is fantastic. Every member of the cast gives a great deal to the coherent, Celtic-inspired score, which in itself is pleasant enough. But this brief telling of the story of the Gunpowder Plot – even if there are plans to expand the show – is poor. And the lyrics are terrible.

Allan and Kieran Lynn’s book for the show uses a narrator to take us through the history. It’s a sensible idea, and Debris Stevenson is more than up to the task. But there’s an over-reliance on the role that, admittedly, the concert format doesn’t aid. Too often we end up hearing what we’ve just heard told again through song. So, while we don’t learn much from the show, it also manages to feel repetitive. Yes, we know the story, but the chosen structure hinders drama. It’s a perverse achievement to rob such events of tension.

Even worse, the verse in the narration is blunt and uninspired. And those qualities are carried into the lyrics with painful results.

At times, listening to the lyrics becomes a game of count the cliché. There are paths to choose and things to prove and even a “tangled web” – and that’s just in one song. Sometimes the lyrics are nonsensical: the plotter Robert Catesby reveals his intentions and then asks would-be accomplices not to tell anyone. I started to wonder if Allan only chose the subject because he could think of rhymes for the surname Percy.

A plan to focus on the characters’ emotions – their love lives and religious beliefs – has potential. The marriage of Thomas and Martha Percy leads to wonderful performances from Lucie Jones and Bradley Jaden. And there’s the start of an interesting triangular relationship with arch-plotter Robert Catesby – another excellent performance from Oliver Tompsett.

Musicals can – and do – deal with history in more inventive ways that make past events feel alive and complex. But there’s no nuance in Treason either in presenting the story or in the lyrics. The dire number for King James (that even the performance of Daniel Boys cannot save) presents a complex character as a sex-crazed cut-out. Simplifying complexity is understandable, but Allan makes the past flat.

The concert is presumably designed to pique interest in the project, with the promise of a stage version to follow this year or next. Maybe that’s why we never get to see Guido Fawkes – who we would presume to be the show’s star. Or maybe we never will? That would be the kind of bold move Treason needs. Before that, though, I fear a lot of these lyrics need to end up on a bonfire.