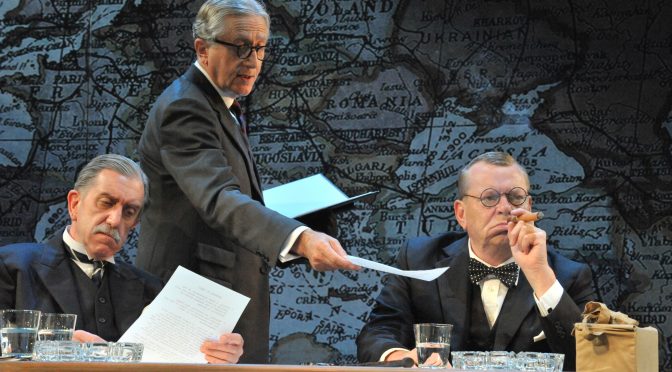 You don’t have to be much of a history buff to know plenty about World War II. The conflict is part of our national consciousness – constantly referenced and a rhetorical mine for commentators. But the idea that, at the start of the war, none other that Winston Churchill, along with his Tory colleagues, countenanced capitulating to Hitler, will be news to most of us. No wonder playwright Ben Brown has leapt on this fascinating subject for his new play, Three Days In May.

Brown skilfully treads a fine line between drama and history lesson. Using Churchill’s secretary as a narrator may be unimaginative but James Alper’s appealing performance matches the clarity of Brown’s writing. With the scene set, a narrative of political manoeuvring and debate on reason and conscience can begin. Director Alan Strachan’s production is understandably static and tension can’t really mount (we know the outcome after all) but Three Days In May successfully conveys the drama of those dark times.

The focus is obviously on Churchill – the novel take is his battle with Cabinet colleagues Chamberlain (Robert Demeger in fine form), and Halifax, performed with magnificent hauteur by Jeremy Clyde. Halifax was the preferred choice to lead Britain in the war (did you know that?) but was an advocate of appeasement. Brown presents his arguments forcefully, setting up a great ‘what if’ scenario.

But it’s the role and performance of Churchill that should ensure ticket sales for Three Days In May. Warren Clarke has the perfect touch of imitation to invoke the man and Brown gives him plenty to work with. Churchill was a driven, controversial figure with more than a touch of instability, and Clarke’s performance calls to mind Ivor Roberts-Jones’ statue, just down the road in Parliament Square – isolated, somewhat menacing and magnificently independent.

Written 4 November 2011 for The London Magazine