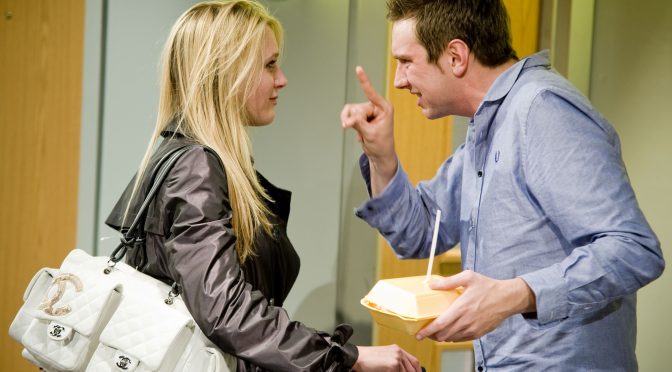 It’s a truism that Londoners are obsessed with property. The London Magazine itself is testament to that fixation. And our neighbours fascinate as well. Third Floor, a new play by Jason Hall about two young neighbours in a part-buy scheme, looks at the fears and quirks that result in the way we live now. It’s commendably topical and guaranteed to strike a chord with anyone living in the capital.

Hall is a talented writer and his script a fine one. Third Floor is funny, with strong observational humour about the social mores of communal living. And it is dramatic – as the new neighbours start to learn about, and subsequently fear, one another. The connection between the two is disappointing though: despite frequent references to Hitchcock, this short play lacks suspense.

And yet there are fine performances to enjoy. The two cast members are identified by where they live (aren’t we all?) and Craig Gazey plays ‘11’. He’s the kind of guy who reminds you that inhibitions can be useful. Revelling in the extravert nature of his character, Gazey gets plenty of laughs. Along the corridor Emily Head is ‘12’. One of the nicest characters I’ve seen on stage for quite a while, she might be prim and officious, but she is hugely endearing, and Head performs the well-written, well-rounded character, wonderfully.

The neighbours unite in acrimony over the resident of flat 10, whose crime is to leave bin bags in the communal corridor. Events escalate and there’s a twist, but it’s the humour that makes Third Floor worth watching; the politics of post-it notes left as complaints and the psychology of doormats! I am obliged to point out the benefits of a competent managing agent – who would surely have prevented the problems that number 12 runs into – although admittedly it wouldn’t have led to such a good play.

Written 14 October 2011 for The London Magazine