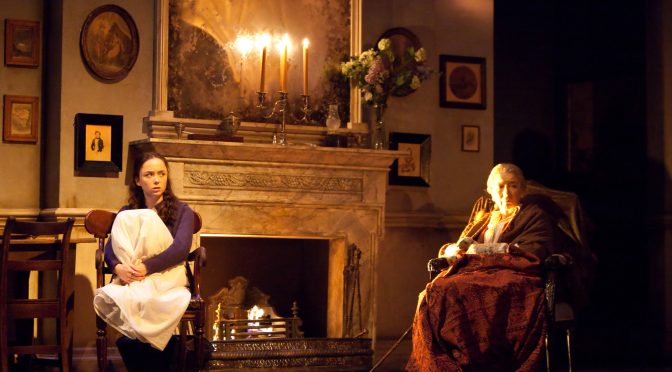 As the nights draw in, what could be more apt than a ghost story? Conor McPherson’s new play, The Veil, aims to chill and thrill over the winter months at the National Theatre.

Set in early 19th-century Ireland, the local gentry, living in not so genteel poverty, and their staff are haunted by both the past and current events in their politically divided nation. Lady Lambroke looks to her daughter’s marriage as a way to escape debts and the country. Her brother, a clergyman defrocked for his interest in spiritualism, is to escort the girl to England for marriage, but his interest in his niece has more to do with her ‘gift’ for the supernatural.

Fenella Woolgar and Emily Taaffe make a convincing mother and daughter who, despite their snobbishness, gain our sympathy and admiration. Jim Norton plays the Reverend Berkeley (named for his interest in Idealism) in an appropriately intelligent style that’s passionate enough to convince us he believes his ideas, but leaves room for us to laugh as well.

The staff, including the redoubtable Mrs Goulding (the excellent Bríd Brennan), are a source of further drama. They come together on appropriate windy, candle-lit nights, as the ghost stories and séances get under way. McPherson directs these scenes wonderfully. Unfortunately, there isn’t much sense of time or place in The Veil and Rae Smith’s impressively designed set and costumes start to seem rather pointless – it all looks great but it isn’t put to enough use.

If McPherson wanted to achieve more than an entertaining evening of ghost stories it seems he has fallen short. Extra themes are hinted at yet never materialise. But The Veil is satisfying supernatural and is sure to appeal to his fans. The storytelling is as good as ever, his characters as likeable and well realised, and the language wonderfully lyrical.

Written 5 October 2011 for The London Magazine