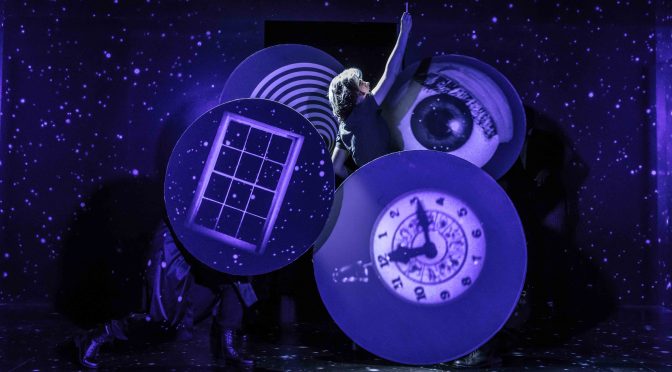 Bringing an iconic TV series to the stage must be a daunting project. Rod Serling’s show ran from 1959 to 1964, a third revival will air on American TV later this year, and cult status has to be a factor. Taking the stories seriously alongside their kitsch attraction is a balancing act. But acclaimed playwright Anne Washburn, who has previously used The Simpsons as inspiration, approaches the project cleverly, with a campy air that makes her script often funny and consistently enjoyable.

The production is in the capable hands of director Richard Jones, who adds further wry touches that complement a period feel and gets the most out of running jokes about cigarettes and the moralistic narration that signed off each TV episode. Along with Paul Steinberg’s star-splattered set design, with a crew of stagehands dressed to almost but not quite blend in, this is a stylish affair that keeps eyes peeled and deserves its transfer from the Almeida Theatre.

There are eight stories performed by ten actors. Jones ensures they are a disciplined team and there’s a great deal of fun in spotting the swiftest changes (I think Nicholas Karimi gets the prize for that) and most dramatic transformations (I’ll go for Oliver Alvin-Wilson). Meanwhile, Adrianna Bertola stands out playing a series of younger characters very well and Natasha J Barnes gets to use plenty of her skills, including a great singing voice, in roles that might be the most varied.

Washburn’s big moves are to interweave the tales and try to make them various. If the focus is on missing people and space, with Cold War preoccupations and aliens aplenty, then at least the tone alters. The fruition of a story about an imminent nuclear attack gets very serious, very quickly (Barnes is excellent here), while an astronaut’s return from a 50-year mission is made surprisingly moving by Alisha Bailey.

A meta-theatrical epilogue, which praises the audience’s “can-do” approach for using our imagination to make so many fantastic situations work, is sweet if a touch predictable. Which takes us to a big problem. Even if you don’t know the stories here exactly, the scenarios are the stuff of urban mythology and staples of pop culture. That’s what interests Washburn. It can be reassuring to see them again (reruns have an appeal), but there’s a lack of tension and suspense in the show, and therefore a limit to how creepy it can get. In short, it can’t surprise. This is a strong production full of smart touches but, for all the effort and talent, these spacey trips into other dimensions aren’t going to rock anybody’s world.