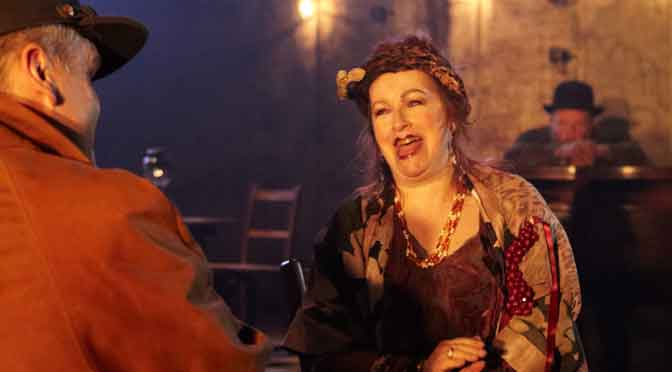 Filing through the Old Vic Tunnels to your seat for The Sea Plays you pass a tableau of a ship’s boiler room. The scene has an energy that continues into the first thing we see on stage – a storm at sea with the crew struggling against the elements. It’s an exciting piece of theatre that stirs the blood.

Unfortunately, matters go downhill as soon as The Sea Plays properly start. Eugene O’Neill’s three sketches show an injured crewman facing his death, a sailor subjected to the espionage-fuelled paranoia of his shipmates and finally a tavern scene with a criminal landlord exploiting those just off the boat. It’s honest of director Kenneth Hoyt not to make more of these pieces than they deserve; they are short and sharp but have little point. Critics often like brevity, but most audience members should beware if they are in search of a satisfyingly full night of theatre.

The cast sometimes struggle with roles only outlined and seldom developed. Matthew Trevannion gets the best bargain, in all three plays playing a character named Driscoll, a fiery Irishman he portrays with appropriate vigour. There are also good performances from Raymond M Sage and Amanda Boxer as a sailor with a dream and an elderly prostitute who helps swindle him. Van Santvoord’s set and Alex Baranowski’s music and sound design cleverly use the space of the tunnels, but creating these fascinating male-dominated environments is a tough ask and the swaggering machismo of the cast often falls short.

The Sea Plays are interesting for O’Neill fans but they are difficult to be passionate about. The scenarios are powerful enough and Hoyt’s direction taut and strong – he is clearly convinced of the trilogy’s power. But these vignettes are so short, and the writing often surprisingly melodramatic, despite O’Neill’s naturalist credentials, that the evening is more a matter of squalls than storms.

Written 27 January 2012 for The London Magazine