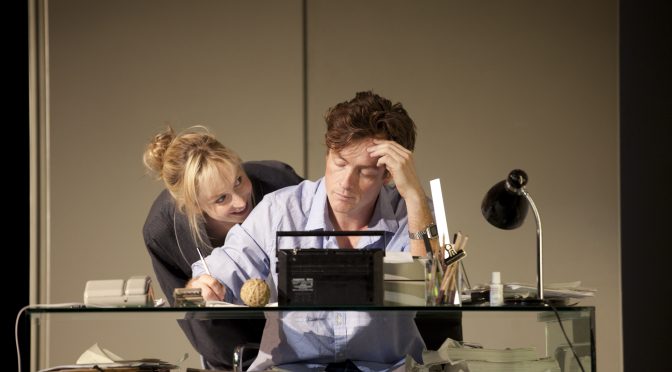 The Real Thing is a relatively simple play for Tom Stoppard. There’s no time travel or astronauts and you don’t need to know about minor characters in other plays. It is the playwright’s meditation on love, a story about the ups and downs of relationships, the questioning of whether an emotion felt is genuine and what repercussions this may have.

Of course, there is more to it than that. The main character is Henry, a successful playwright, celebrated for his keen intellect. Ring any bells? As we follow his married life we are treated to amusing insights into the theatre that mirror the characters’ actions.

Still, this is Stoppard with slightly less philosophy. Henry ruminates on how our perspective alters a situation, but this is to investigate emotion rather than metaphysics. It’s a question of aesthetics. The search is for a subjective truth – the qualitative difference between Bach and Henry’s preferred Procol Harum are down to him, as are the judgements of his love life.

All this is highly entertaining – it is bound to be with Stoppard’s witty script and Toby Stephens’ excellent delivery. He is convincingly aloof and skilled at slowly revealing the complexities of his character. Generally unlikeable for his smug condescension, when he does show emotion you realise how involved you have become. It is a masterfully seductive performance.

Despite his ability, Stephens doesn’t steal the show. It seems the only people more amusingly self-obsessed than writers are actresses. Henry enters into relationships with two. The always-excellent Fenella Woolgar delivers lines in deadpan fashion. She plays Henry’s first wife Charlotte who is replaced by Annie (Hattie Morahan). The latter provides dramatic edge when we encounter the new couple breaking up their marriages, passion during their ‘honeymoon’ period and real emotion when their relationship becomes troubled.

Both women contrast with Henry. After years of marriage Charlotte is more than aware of his failings, and Annie’s political convictions provide a foil (albeit an ironic one) to his nonchalance. Henry learns that his deep commitment and Romantic notions are perceived as carelessness and is accused of being too intellectual. Barnaby Kay touchingly defends the wife who is about to leave him by saying that Henry’s life and work fail to deal with the ‘messy’ stuff that really counts. Stoppard has his eye on this – there are dirty handkerchiefs and mucky innuendo here but it doesn’t quite convince. Henry’s well-drawn teenage daughter Debbie (Louise Calf) makes a great debut pointing out that all this angst and debate is all just for the ‘architect’ classes.

Stoppard is too clever not to know that he is falling into this trap. While Debbie’s free love solution to the problem is swiftly and suitably dismissed, there is too much reliance on the fact that love is universal to avoid the problem she highlights. It is difficult to see who would identify with these characters or find them aspirational. Even with all the skill and intelligence on display here we aren’t involved enough and fail to connect. Stoppard’s ‘less is more’ approach doesn’t quite deliver.

Written 23 April for The London Magazine