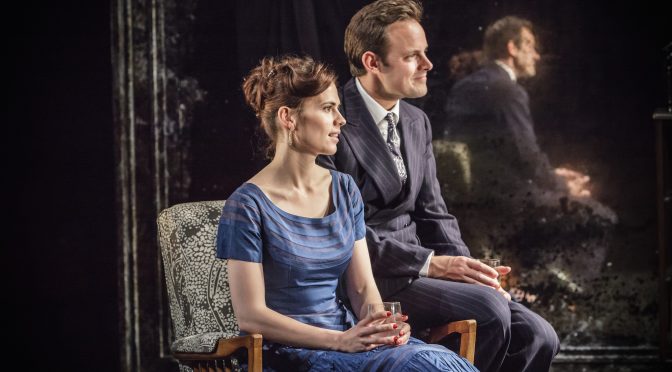 Nearly six years after its premiere at the Royal Court’s upstairs theatre, Jamie Lloyd once more directs Alexi Kaye Campbell’s play, The Pride, this time at the Trafalgar Studios. A story of gay life, set in 1958 and 50 years later, it deserves to be seen again, and by more than those who could squeeze into the Royal Court’s smaller space. Examining changing attitudes and personal politics, the play insures a broad appeal – just – by virtue of its heartfelt emotions.

The Pride is occasionally verbose. Kaye Campbell doesn’t wear his learning lightly, but there is no doubt the writing is accomplished. Lloyd’s direction is the key to its success: he brings out the drama and speed in a script that could lag and his bold staging, with a mirror used to create a spooky confluence between the ages, injects theatricality.

A time-travelling structure, flying between the 1950s and the present with exciting speed, allows the actors to shine. Harry Hadden-Jones and Al Weaver play the lovers Philip and Oliver, wracked with guilt and fear in the Fifties and just as confused with their contemporary freedoms. Three cameo roles performed commendably by Matthew Horne provide the majority of the play’s humour. But the star is Hayley Atwell as Sylvia, Philip’s wife in the past and Oliver’s friend in the present – the most interesting roles in the play performed with great skill.

The historical scenes pack the most punch, as there seems to be so much more at stake. The contemporary version of Oliver’s character, battling with fidelity and a sex addiction, seems trivial in comparison. But Kaye Campbell has a powerful idea – highlighting hard-won freedoms as a call to action among the gay community for continued political involvement. At a time when legislation in Russia focuses attention on gay rights globally, the play seems topical and important: the cast’s appearance at the curtain call with protest placards, dedicating their performance ‘To Russia with love’, deserves applause.

Written 21 August 2013 for The London Magazine