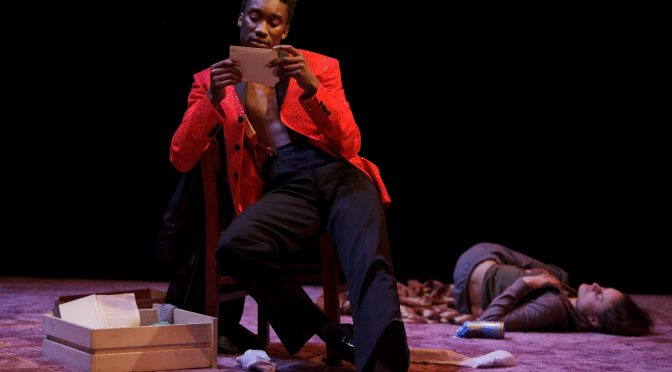 The Arcola’s new production of Philip Ridley’s The Pitchfork Disney marks the play’s 21st anniversary. It’s a study in terror, which might lead us to speculate whether our collective fears have changed in texture over the last two decades. Ultimately Ridley deals with such basic, and base, themes that his work remains alarming and powerful.

Under Edward Dick’s faultless direction, Chris New and Mariah Gale are remarkable as Presley and Haley – pill-popping, chocolate gorging twins with a psychotic bent. Agoraphobics who wallow in their piteous existence, they tell stories to each other not just for escapism but to perpetuate their trauma.

And what stories, hypnotically poetic, ruthlessly insightful and grotesquely overblown as they are. The cast revel in the telling, with New especially adept in bringing out the morbid, humorous edge. His Presley peeps through the letterbox, looking at the real world but describing his imagined apocalypse.

When the door to this disgusting flat is opened, inviting in a “pretty boy and a foreigner”, we start to see connections between their fantasies and what really exists. Cosmo Disney has a thought-provoking story of his own, and Nathan Stewart-Jarrett’s performance in the role is captivating. He damns the twins as “ancient children” and mocks mankind’s desire for a “daily dose of disgust”, making his dissecting analysis more like a vivisection.

Disney is a performer and Stewart-Jarrett preens to perfection, with a cabaret trick of eating cockroaches. But The Pitchfork Disney doesn’t just curl toes – it surprises. When Disney’s fellow performer Pitchfork arrives, it is into a bizarre, spooky and fantastic scene that doesn’t deserve a plot spoiler. Presley’s nightmare starts to come to life and they play’s conclusion is truly desperate.

If people such as these exist, they surely don’t get this weird without something happening to them. Ridley never offers us a specific reason and his play is so full of themes that the mind boggles. In this way, he leaves us to examine our own fears of “freak accidents and freaks” – and that of course, is truly scary.

Written 2 February 2012 for The London Magazine