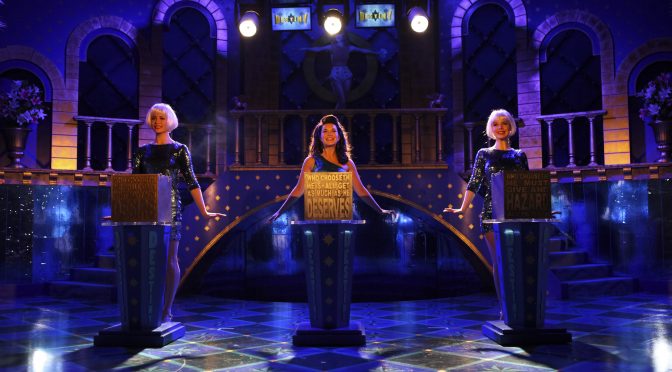 Rupert Goold’s production of The Merchant of Venice is an eye-catching and entertaining take on Shakespeare’s play. Moving the action from Venice to Vegas, complete with show girls and slot machines, is in keeping with this energetic director’s past work. Since both cities focus on money, more specifically greed, the relocation isn’t crazy, and the parallel between gambling and the risks the merchant Antonio takes really works. So Las Vegas adds fun. Unfortunately, this means some forced interpretations of the text, particularly in the recollections of the servant Lancelet, played by a very game Jamie Beamish transformed into an Elvis impersonator. It’s definitely something you’ll either love or hate.

On firmer ground, Goold stages the competition for Portia’s hand in marriage as a tacky quiz show – think Deal Or No Deal. Portia (Susannah Fielding) and her maid, a co-host, are airhead hillbillies, while suitors choose which box contains permission to marry, on TV. Live recording the action on stage feels like a frill, but the approach adds drama to repetitive scenes that can be dull and develops a theme of role-playing nicely. In the courtroom scene, when Portia comes disguised to defend Antonio, it’s thankfully not a case of Legally Blond, but real desperation she conveys. Portia’s insistence on the law becomes vicious, in keeping with a strain of shock tactics that make the scene gripping.

So here’s the real surprise of the evening. This Merchant of Venice boasts Ian McDiarmid, making a welcome return to the Almeida and never to be missed on stage. Also, the excellent Scott Handy does a superb job as Antonio, the still centre of this often stormy show. But it’s Fielding and the role of Portia that really intrigues. The play’s anti-Semitism is clear and bravely dealt with, yet Goold seems more concerned with its misogyny. The final scene, a happy reunion at Belmont, often a cozy rounding up of the play, has a suggestion of violence towards the young brides that leaves an uneasy feeling. As Portia dons the blonde wig she wore on television, clearly destined to an inferior role in her new marriage, it appears she has lost her bet.