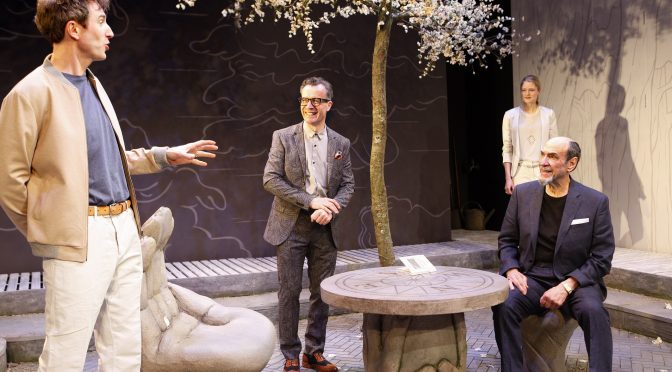 Best selling German author Daniel Kehlmann’s play, translated by Christopher Hampton, is urbane, witty and stylish. It works around the contrived scenario of an elderly playwright, paid by a philanthropic foundation, advising a younger writer, and is an effective conversation piece.

There are plenty of laughs around the arrogance and insecurity of the new wunderkind, Martin. You know he’s in trouble since a critic has called him the ‘‘voice of his generation’’. Daniel Weyman puts a lot of energy into the role, desperately so at times, but his mania is in keeping with the efficient direction from Laurence Boswell who employs a brisk pace that serves the comedy in the piece well.

When The Mentor takes a more serious tone, it is a hostage to fortune; as it’s observed about Martin’s play, Kehlmann’s also ends up containing neither delight nor despair. Battles about realism in the theatre are fun when smirking about shows with cement mixers in them – we’ve all been there – but when Kehlmann adds his own poetic touches they fall flat. Ideas about Art are barely established, let alone explored.

A subplot about the seduction of Martin’s wife, and the presence of the foundations administrator, are both too thin. The performances, from Naomi Frederick and Jonathan Cullen, are good. But the female character here is there only as a foil for the men; watch out for lines thrown in to bolster character. While the administrator’s decision to jack it all in and become a painter is left hanging, after initially treating his aspirations as a joke.

The evening really only works as a vehicle for Homeland and Amadeus star F Murray Abraham. As the eponymous tutor Benjamin Rubin, he gives a magnetic performance that carries the show. It’s not much of show, so maybe that’s not too hard, but it’s noticeable the energy lifts when he’s on stage. Kehlmann has written a great part here – it’s a shame the idea of Rubin’s senility isn’t explored further. But this old goat, arrogant as they come, makes good company. Although haunted by early success, Rubin has grown into taking art less seriously; a mature observation that’s the perfect lesson about this diverting, if slim, play.