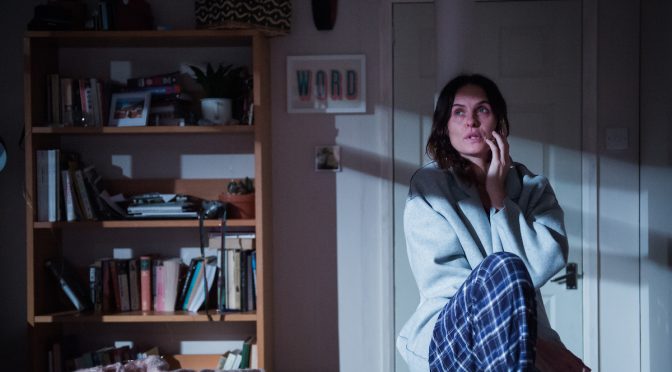 Sarah Beaton’s design for this new version of Jean Cocteau’s play sets the audience outside the action. We view the exterior of a woman’s flat and glimpse her inside; brilliantly conveying the piece’s novel construction and its theme of isolation. For The Human Voice is only half a conversation, a telephone call between two lovers breaking up when we hear only one. And although just half of the story is heard, that’s more than equal to making this show a must see.

Just how we hear the one-sided story is the production’s next smart move. Headphones are worn throughout by each audience member. Masterminded by Mike Winship, there’s a creepy quality to the technology. Simultaneously increasing intimacy, it also distances us: we can hear every breath, including recollections of the couple’s closest moments. But is this a crossed line we’re eavesdropping on? Or are we the person on the other end of the line being spoken to?

So far, so clever. Underneath these flashy touches is solid work on the text and direction – both from Daniel Raggett. A whole play with Cocteau’s concept, even if only an hour long, must pose peculiar problems, far more than a regular monologue, for its solo star. Tension is the key, a note taken by the performer Leanne Best, who plunges us into her character’s anxiety with frightening efficiency. When the call becomes interrupted, her panic is contagious. As lies and truths fall over one another, Best never loses her grip.

Raggett takes care not to overstress any modern updating to this 1930 play – he doesn’t need to, we’re surely all aware of our reliance on our phones – a temptation many theatre makers would fall for. To see the complications of the “invisible line” that the technology creates in such detail is salutary. To make a drama of such intensity, so full of forensic insight and fundamental truths, is exciting. High quality work all around – pick up your phone and book a ticket.