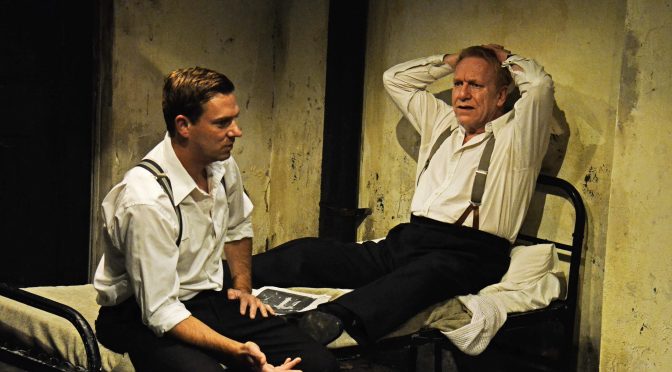 Time is of the essence Harold Pinter’s play The Dumb Waiter. The one-act work, which sees two hit men waiting for their instructions, plays with timescales and sets out to disorientate the audience. Protagonists Gus and Ben, your average working killers, complain about their employment conditions and are exposed to an increasingly bizarre series of events – including the eponymous serving hatch of the play’s title, from which strange and threatening orders emerge. The tension mounts, hilarity ensues and in true Pinter style, we’re exposed to raw emotion and left a little puzzled.

The director Jamie Glover, primarily known as an actor, has worked with the talented duo Joe Armstrong and Clive Wood to create superbly detailed performances. Wood plays Ben, the “senior partner”, who bristles with tension. Distracting banalities from the newspaper and professed confidence in the “organisation” they work for can’t hide his anxiety. Wood’s red-ringed eyes reveal he is close to the edge and one scene of his starring into the distance, collapsed in on himself, is extremely powerful. His younger colleague, Gus, is the one willing to ask questions – and there are lots of them. Armstrong gives a winning performance, combining a endearingly puzzled look with great comic skill when the couple squabble over semantics. His character might be a cog in a machine, but one with some spirit and the will examine the way in which they are being manipulated.

Maybe it was the delightfully-crafted pumpkins lining the entrance to the theatre, or more likely Peter Rice’s effective sound design to the show which makes the dumb waiter sound like a supernatural guillotine – but this is a scary night. The men’s boredom escalates into fear instantly but the comedy in the play suffers. Glover opts for menace – a valid decision – but I enjoy Pinter’s dark comedy and felt it lacking here. The absurdities of the situation raise laughs but the general air is one of brooding. It adds to the intensity though and the show becomes incredibly swift; there’s time for dinner afterwards and this play leaves you plenty to discuss.

Written 29 October 2013 for The London Magazine