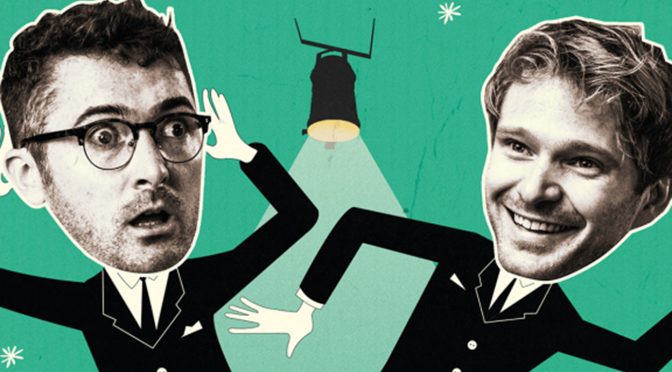 Comedy double acts have a distinct appeal to British audiences that funny men Ben Ashenden and Alex Owen know all about. The clever duo tap into a peculiarly nostalgic appeal – and their considerable chemistry – to write and perform a show that is funny and sweet.

AKA The Pin, Ashenden and Owen have a gentle style that plays on humility and sensitivity. Puns and touches of the ridiculous are light and make Owen’s character appealing, while Ashenden’s skill at delivering deadpan lines is strong.

The duo and their show gesture toward audience participation. You’ve got to expect a little… but there’s nothing scary here. A different guest star each evening (an impressive rota), creates a sense of expectation – who will you see?

Also taking on the roles of Jimmy and Sid, two older performers whose comeback tour the pair are the warm-up act for, proves less successful. Little effort is made to convey the age of these secondary characters and you can’t help wondering if stronger actors could do more. But the roles are written well and the older act get laughs of their own. It’s nice to note the duo’s respect for their elders… even as their characters take advantage to try and further their careers.

It is with the plot of The Comeback that the show stands out as more than just stand-up comedy. Mayhem ensues as both acts become keen to impress a Hollywood director in the audience. Yes, it’s silly, but the back stage shenanigans are well done and the fun with props emphasises theatricality.

A thoughtful conflict between young and old – both ambitious about their careers – adds weight to The Comeback. Both acts aim to be true to themselves and to retain a spirit to their performances in a manner that ends up surprisingly touching.