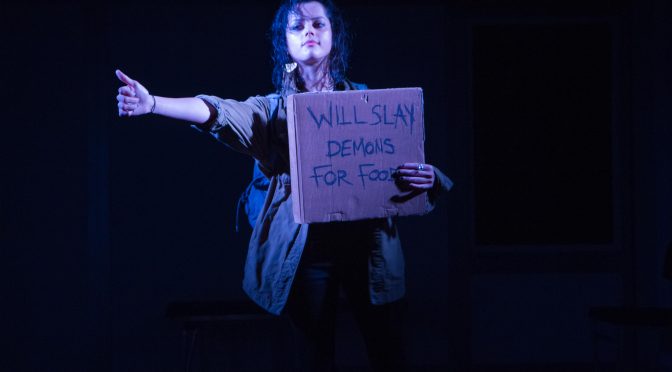 Aditi Brennan Kapil’s play is a teenage drama with an unusual twist: Kalki, a new arrival at school, might just be the tenth incarnation of Vishnu. When she disappears just as mysteriously as she arrived, a police investigation ensues, creating an intriguing and entertaining piece that’s easy to recommend.

With taut direction by Alex Brown, the chronicles zip along with humour, mystery and edginess. Kalki takes her schoolmates shoplifting and to a house party, injecting danger and a confidence into their lives that inspire a renegade status. She’s not the kind of girl you’d want you daughter to hang out with, but she’s hard to resist. If, as in my school, religious instruction was entirely C of E, this “Hindu window” can be a little confusing but it’s always interesting.

Engaging, well-performed roles secure the work. Angela Terence and Jordan Loughran play Kalki’s young friends: their relationship convincing in its insecurity. A capable Trevor Michael Georges is the amiable policeman tasked with questioning the girls about Kalki’s disappearance and he serves as a foil to their youth. Appropriately, Amrita Acharia is the centre of attention, giving a divine performance: sexy and dangerous, elemental and charismatic. A skittish short play, with dialogue as mercurial as its title character, The Chronicles of Kalki are more convincing than you’d think possible, creating a rich and memorable evening.