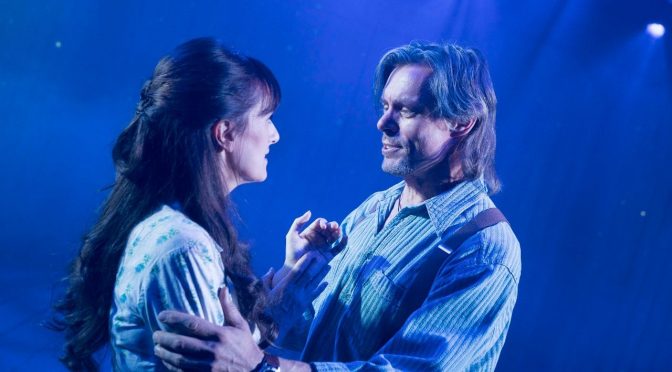 It’s easy to see why talented composer and lyricist Jason Robert Brown would be the go-to man for this project. His masterful The Last Five Years was a similarly simple love story that he managed to make interesting. But here the source material is Robert James Waller’s surprise best-selling book – a soppy affair of little promise. So, while the musical is wonderful and the production, from director Trevor Nunn, consistent with this venue’s high standards, the story is too thin and the show just a little dull.

In Iowa, which we’re too frequently reminded is a boring location, while housewife Francesca’s family is at the state fair, she has an affair with Rick, a photographer on assignment from National Geographic. Francesca’s dedication to her family means the romance is doomed. And that’s it – although on stage this brief encounter doesn’t exactly speed along.

A good deal of the problem comes from the men in Francesca’s life. Her husband, despite Dale Rapley’s efforts in the role, really is boring. And her lover, while initially charismatic, ends up pretentious and annoying. Edward Baker-Duly sounds good as Rick but the character is flat and the performance suffers as a result. Talk of his art, let alone his back story, grates. By the time he starts using his hands to frame a picture (which I’ve never seen a real photographer do), you wonder why Francesca isn’t planning to run away from both of them.

Mercifully, Marsha Norman’s book focuses on Francesca and the piece becomes her story. Since Jenna Russell takes the role – and is, thankfully, barely off stage – the show is pretty much saved. Russell sings every song to perfection and many of her numbers are superb. While Francesca is written as a touch too much the martyr, Russell has the presence to make her seem courageous. And she also injects some humour into the role, allowing us to warm to the character. Unfortunately, Russell is the only cast member that gets even a smile (sorry, the nosey neighbours and squabbling teenage kids don’t cut it).

With a score this intelligent, much can be forgiven: it’s a smart mix of Americana, with a controlled period feel, and delicate Italian touches indicating Francesca’s heritage. But not even Robert Brown’s brains can escape from the clichés in the story and his lyrics are, unusually, pedestrian at times. The whole piece is deliberately underplayed, which Nunn appreciates, and as a strategy that is understandable. This is supposed to be a story of everyday lives. When romance arrives, the score is lush but any heady moments are the only speedy thing here; the result is humdrum and humourless and the show ends up a frigid affair.