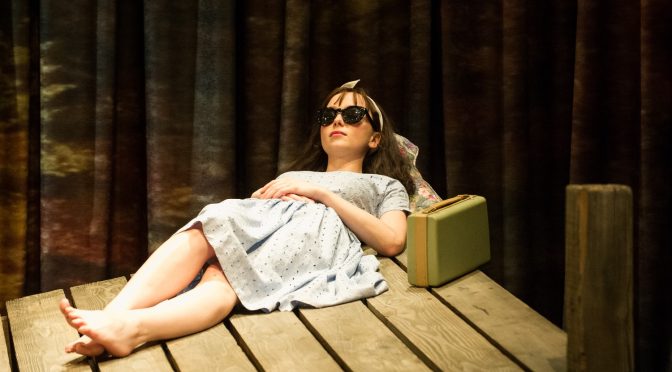 Arriving from the Ustinov Studio (Theatre Royal Bath), having already received a big thumbs-up from the critics, The American Plan opened in London last night at the St. James Theatre. Full of laughs and bittersweet wisdom, this exquisitely written play from 1990 by Richard Greenberg deals with not one but several love stories.

Here we have a fascinating trio of women. Eva and her “difficult” daughter Lili, wealthy refugees from the Nazis, are on vacation with their maid Olivia in the Catskill Mountains across a lake from other Jewish families who flock to the area. The women are isolated by an amusing, imported snobbery. Until a young man arrives.

Nick is a “blue chip stock” kind of guy, but true romance isn’t the story here. All these Americans, émigrés old and new, are full of plans and a warped determination to bring them to fruition. Plots might be a more accurate description if there wasn’t so much sincerity behind their motivation. The lies they tell are often deliciously funny but there’s real heart here, too.

Entangled with a family, not eccentric but “giddy around the circumference”, where the daughter is the wrong side of neurotic and the matriarch lives up to every stereotype of Jewish motherhood, you never much rate Nick’s chances. But he has secrets and pain of his own and watching them revealed is great theatre.

And the lies don’t stop with the introduction of the final character, Gil. In the part, Mark Edel-Hunt more than makes up for his later arrival with a great plot twist that, since I liked the play so much, I really don’t want to spoil.

Diana Quick is scene stealing as Eva (her accent alone fascinates), putting the metal in mittel European, and Dona Croll makes a marvellous foil for her as the “enduring” Olivia whose inscrutable privacy hints at yet more tales. Emily Taaffe fully embodies the “mercurial” Lili, delighting with her wit then shocking with a traumatic intensity. And effectively subduing his character’s hidden depths until just the right moment, Luke Allen-Gale is tremendous as Nick.

This production does true justice to a fine play and it’s clear those responsible have a thorough understanding of the text. More than his intelligent exploration of “intricately unhappy” lives, Greenberg brings a Jamesian flavour and intelligent humour to his examination of our deepest self-fashioning. The result is a play that resonates with depth.

Written 9 July 2013 for The London Magazine