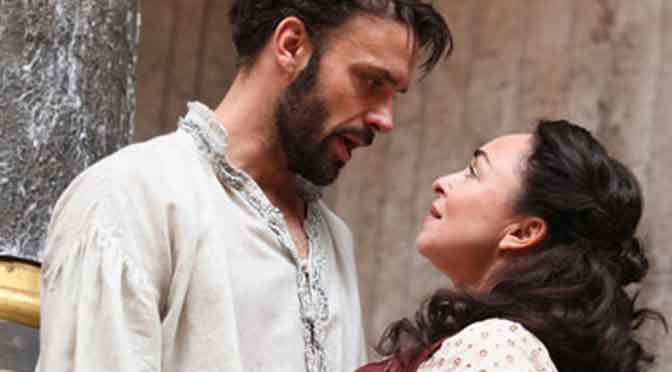 Olivier-Award-winning actress Eve Best makes her directorial debut at Shakespeare’s Globe this summer with an accessible and exhilarating production of Macbeth. It’s an assured first time effort that sends a chill down the spine even on a hot summer’s day.

Perhaps not surprisingly, given Best’s background, her version of the supernatural thriller puts the performers to the fore. Joseph Millson does a great job in the title role, his Macbeth’s fiery temper increasing the drama and sense of instability. Clearly at home in the Globe – like many of the cast, Millson’s direct addresses to the crowd create a sense of startling immediacy.

Best’s attention to her troupe only has one indulgence – an unnecessarily prolonged scene with the Porter. This aside, with such an excellent cast, giving every role its due is clever. Duncan’s court, at first sight, an array of powdered fops, develop their roles wonderfully and the short scene with Lady Macduff (Finty Williams) is superb.

Full of prophecy and portents rather than politics, Best downplays militaristic bravado, and the female roles in the play benefit from this. The witches, for example, are a beguiling bunch, ironically harmonious, using movement and music to cast a spell. Their fright-factor is all the greater for its understated spookiness.

Samantha Spiro is the star of the show. Her Lady Macbeth is dynamic, her transformation into a Queen astounding, and her performance one of great depth. Macbeth clearly blames her for the path he sets foot on and an alarming scene of domestic abuse is a brave and electrifying take on their famous conjugal complicity.

Written 7 July 2013 for The London Magazine