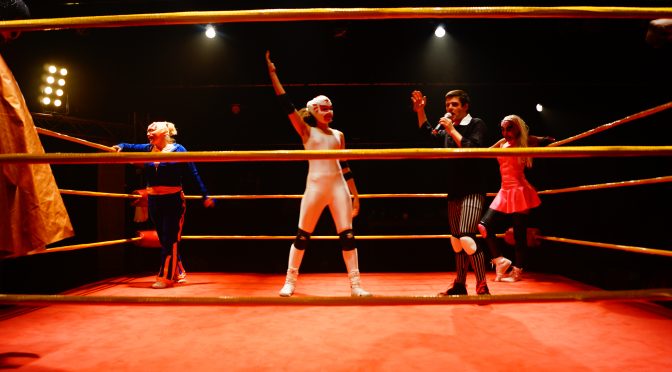 The prestigious Southwark Playhouse has relocated from the arches under London Bridge to a new venue in Elephant and Castle. It opens with the unashamedly populist Tanzi Libre, a show that should make it welcome among its new neighbours. Of all the performances reviewed for The London Magazine, this tale of a young girl’s struggle through life – as a Mexican wrestler – must be one of the oddest, but because of its originality, also one of the most fun.

Writer Claire Luckham’s story started out in Manchester but, in this incarnation, the action is moved to South London. From a baby wrestling with her mother, through school and courtship, Tanzi’s tale puts a heavy weight on audience participation. A sign at the entrance requests our boos, hisses and heckles. It’s an essential part of the night and if it’s your kind of thing you’ll love it.

The staging, set entirely in the ring, really enforces wrestling’s theatricality. Martin Thomas’ superb designs and costumes fit the brash writing and songs with a suitable tongue-in-cheek feel. Deliberately, the only thing about the show that’s polished is the wrestling itself – it would have to be to avoid serious injury, and both the cast’s and director Ellie Jones’ bravery here is quite astounding to this timid spectator.

Throwing one another around, pretty much constantly, impresses, especially when it comes to the finale where Tanzi (Olivia Onyehara) wrestles her husband Dean Rebel (Kazeem Tosin Amore) in order to decide who stays at home with their child and who gets to pursue a professional career in ring. All the stomping and shouting inevitably gets in the way of comprehension, and the singing certainly isn’t a priority but with Mark Rice-Oxley’s rousing performance as the compere there’s little time to question the show’s politics or problems. You should be too busy yelling along.