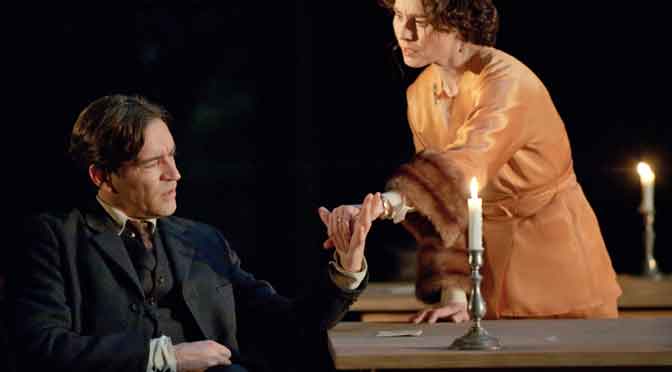 Farewell to the Theatre, a new play at Hampstead, takes as its subject the life and work of Harley Granville-Barker. A pivotal figure in British theatre, the multi-talented Granville-Barker is today known primarily as a playwright. Boldly taking on another writer as his subject, the play’s author, Richard Nelson, shows off his own experience with an impeccably crafted, intelligently layered script.

Granville-Barker was also an actor and it is easy to imagine he would have been proud of these performances at Hampstead. Ben Chaplin takes on the lead with a commanding intelligence and complexity: Granville-Barker was a severe critic with a cruel tongue but also a wish to be kind. Jemma Redgrave is superb as the Chekhovian sister to a persecuted lecturer Granville-Barker is staying with. Tara Fitzgerald is wonderful as a retired actress mooning over a young boy performing in the college play, a role that allows William French to make an impressive debut.

Granville-Barker moved from acting to direction. His lessons about ensemble work haven’t been lost on director Roger Michell, whose control and sensitivity bring out the best in Farewell to the Theatre’s cast as well as its script. Michell’s pacing is superb. Avoiding all traces of indulgence, he takes the production at “a good clip”, just as Granville-Barker advised we should deal with Shakespeare: at 100 minutes straight through we are left satisfied but wanting more – not an easy trick to pull off.

Ultimately, the influence Granville-Barker has on the stage stems from his work as a theoretician: born of a passion for the theatre that, during the course of the play, we see under threat. Farewell to the Theatre is a play Granville-Barker is writing – about a thespian tired of the business that surrounds putting on a play. It is an exhaustion I guarantee you will not feel if you see this one. Concluding with an impromptu performance of a mummers’ play, here we have the magical power of theatre confirmed, in a simple, effective, efficient fashion.

Written 9 March 2012 for The London Magazine