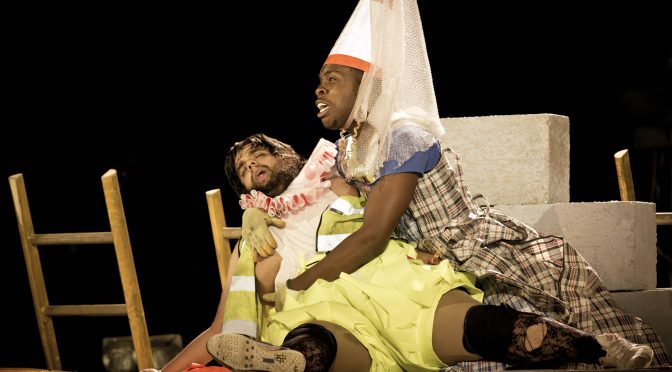 Regent’s Park Open Air Theatre has such a long association with A Midsummer Night’s Dream that any production of the Shakespearean favourite is highly anticipated. Director Matthew Dunster’s bold version seeks to challenge any tendency to see the play as comfortable by reimagining the setting as a gypsy camp.

There’s nothing wrong with the idea: it allows a fresh look at a well-known text and affords designer Jon Bausor the chance to create a fantastic set, full of surprises, that Laura Hopkin’s costumes look great on. Unfortunately, it’s a concept that pays few dividends and results in a misguided midsummer night.

The gypsy theme works fine for the play’s quartet of lovers. Making their entrance mid-fight, Demetrius and Lysander, finely performed by Kingsley Ben Adir and Tom Padley, are full of youthful virility. As Hermia and Helena, Rebecca Oldfield is spirited and Hayley Gullivan superb.

In comparison, the fairies are conventionally supernatural. Despite a BMX-riding Puck, they seem to have little connection with the rest of the play and this is hampered by some histrionic performances and laboured choreography. When Titania falls in love with Bottom, the result is crude and silly.

The workmen who perform for the now Gypsy King are another unhappy fit. Valiantly led by George Bukhari, their extended party scene is a surreal mix of My Big Fat Gypsy Wedding and Britain’s Got Talent that pleases the crowd but creates an unbalanced production. Their play within a play is performed in mock-operatic style with great energy, but the laughs they get become a problem as their success jars with the overall feel of the production.

Dunster makes many efforts to inject menace into A Midsummer Night’s Dream, emphasising violence from the start. Theseus’ confession to his bride – “I woo’ed thee with my sword” – remains a threat throughout: their wedding celebrations are fraught. But as a device to add tension the idea is overplayed. Dunster has to add to the play – to the extent of including a karaoke performance! Like much of the show, it’s inventive, but this is a problem that Dunster has created in the first place.

Written 13 June 2012 for The London Magazine