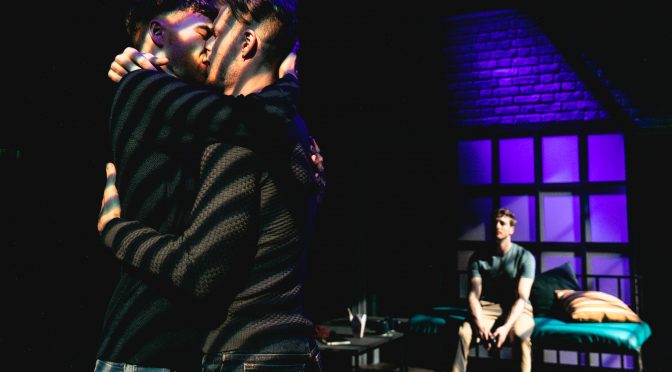 A huge success off-Broadway, S Asher Gelman’s play has the open marriage of Alex and Josh tested by a younger man called Darius. The play has the qualifications for a strong fringe show, with close character studies and an invitation to discussion in the bar afterwards. It clearly struck a chord in New York with a record-breaking run and it will be interesting to see if it excites London. For – with best wishes extended to a quality production – the play plods and its characters annoy. Despite all its transparent efforts to be sexy, bold and brave – might we Brits like our sex a bit less serious?

Afterglow is earnest. Attempts at jokes are made but are poor and contrived. Director Tom O’Brien tries a light touch at times, and the show certainly looks stylish, but goodness how important this threesome-that-goes-wrong thinks it is. The talented actors – Jesse Fox, Sean Hart and Danny Mahoney – each make the most of their roles, fighting hard to inject humour and pathos, but what roles to tackle. Each man’s solipsism reaches ridiculous levels: Alex wants space and Josh needs attention. Clearly a little self-knowledge is a dangerous thing, as both think admitting their faults excuses them. Meanwhile, Darius wants to be good, primarily to live up to the etymology of his name. Ultimately, they all wallow in self-pity over a drama of their own making.

Gelman could surely be more generous with his creations. It’s their explicit approach to feelings, rather than the play’s considerable amount of nudity, that is of note. Explaining every emotion – without subtlety or ambiguity – becomes tiring. And there’s only ever facile lip service to how someone else feels. The dialogue sounds like a bad therapy session. Maybe it’s accurate, or possibly satirical, but it makes caring about this self-obsessed crew next to impossible.

That the play wants to look at a social trend is fair enough and, if media coverage is anything to go, by the topic seems to qualify. But, alongside some predictable waffle about the “illusion of choice” facing gay men nowadays, we all know this story will end in tears. There’s an interesting attempt to focus the play, many themes found in gay plays are absent, but the result is little sense of a world outside the bedroom. Darius’ finances make an incongruous exception that could have been explored more. Quite simply, too little happens here. Alex’s observation that nobody has written a fairy tale for polyamory isn’t news (if Gelman had tried just that, perhaps he might have challenged us more). And, like many a story that sounds risqué, Afterglow is ultimately conservative. Arguably, that’s the biggest turn off.