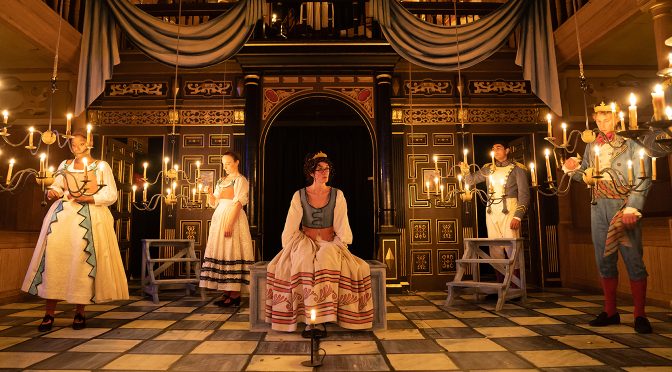 One of the insights provided by the Globe’s indoor venue is the amazing acoustics early audiences could enjoy. You can hear a pin drop here; a treat used to great effect by composers James Fortune and Laura Moody, whose score is this production’s first triumph. Moody, performing her work alongside percussion and harp (Joley Cragg and Louisa Duggan, respectively), adds plenty of fun to Shakespeare’s comedy, but also a sense of experimentation and mystery – appropriate to an often puzzling play. And there’s a melancholy that understands the piece’s poetry. For the finale, a music box with a punched sheet echoes the letters that fill the play’s plot – as the paper floats around Moody’s head the look is magical, the sound haunting. I sincerely hope someone is planning to release a recording.

This cerebral play is not an easy one. Full of the conventions of courtly love, the wordplay is particularly dense. Even when parodying verbosity it is, well, verbose. It’s director Nick Bagnall’s achievement that a text neglected as unplayable feels so at home on a stage. Bagnall creates a sense of playfulness that makes this Love’s Labour’s Lost entertaining and enchanting. Toy soldiers, hobby horses to ride on and a dressing-up box create a storybook feel. The actors’ movements recall charades. It’s sweet but also sad, creating the perfect keys – major and minor – for a play where vows of chastity and love are not just celebrated but questioned, even deflated.

A sense of enjoyment in irreverence and exploration is embodied by the cast. Bagnall edits proceedings down to three couples who fall in love, but whose marriages are postponed, and they are performed with considerable fun but also an injection of cynicism. Leaphia Darko, Jade Williams and Kirsty Woodward all work hard to make a princess and her ladies-in-waiting real women. Although the roles are uneven, they feel like a matched trio. The “young bloods” who vow celibacy only to renounce it moments later are suitably ridiculous. There’s excellent comic work from Dharmesh Patel, Tom Kanji and Paul Stocker. A disguised appearance as a “mess of Russians” combines fantasy and farce beautifully.

Kanji and Stocker also impress as a vicar and tutor combo who Shakespeare mocks for their pretentions. This is a tough job – a lot of the jokes are arcane – but with just a touch of The Muppets‘ Statler and Waldorf, there are plenty of laughs. Nonetheless, the star turn has to be Jos Vantyler who gives an unforgettable performance as the Spaniard, Don “a mint of phrases” Armado. Vantyler’s comedy accent is superb, and that it isn’t to the detriment of the lines is a huge technical achievement. Accompanied by a page boy that we have to imagine (Vantyler gets his lines, too), he postures like a toreador and uses machismo to tip the performance into drag king territory. This fantastic interpretation is a further high note for this winning show.