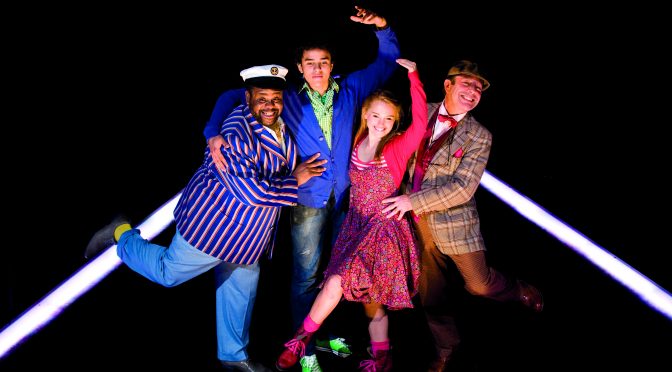 The Fantasticks is the simplest of stories, staged minimally to emphasise theatricality and dealing with universals. Archetypal characters and situations are presented with comedy and tragedy painted broadly. If you want to sound clever you can say it uses the oldest performance traditions, with a narrator as chorus and drawing on commedia dell’arte. It is designed to appeal to all and, as the success of its songs by Harvey Schmidt, along with its 50-year run in New York indicates, it does so.
Boy meets girl and they fall in love. Cue glitter. There seems to be an obstacle – their warring fathers. Overcome this and the result is more glitter. A further set of problems to confirm this love is the real thing and you have a finale that includes (you guessed it) glitter. There really is a lot of glitter.

The book and lyrics by Tom Jones are far more knowing than this outline suggests. His reference is as much Pyramus and Thisbe performed by the rude mechanicals as Romeo and Juliet. It is a surprise, therefore, that Amon Miyamoto’s production is so heavy handed when it comes to sentiment. An observation that the production is ‘avant garde’ gets the biggest laugh of the evening, as the black jutting stage and mawkish choreography are jarring. As is the audience participation with those sitting on stage drafted into the action. It may prove some point for the director but it does little for the show.

Unfortunately this overdose of sincerity seems to have made an impression on the younger members of the cast. Luke Brady and Lorna Want have great voices but look as if they are trying too hard. Hadley Fraser shares this problem when he comes to deliver the play’s numerous homely truths as The Narrator but he also gets the chance to show great comic talent when he plays the bandit El Gallo. Clive Rowe and David Burt seem to make getting laughs easy work. They are wonderful together. Likewise Paul Hunter and Edward Petherbridge who are conscripted in a plot to bring the lovers together. From the moment of their wonderful entrance on stage they are laugh-out-loud funny. Petherbridge really is fantastic and is in total control of the audience.

The Fantasticks is a joyous celebration of the power of your imagination. You have to be hard hearted indeed not to love such an appealing show even if it is essential to revel in the incredible and let yourself go. And why not? Sometimes it is great to take things with a pinch of salt. Or maybe a pinch of glitter.

Written 11 June 2010 for The London Magazine