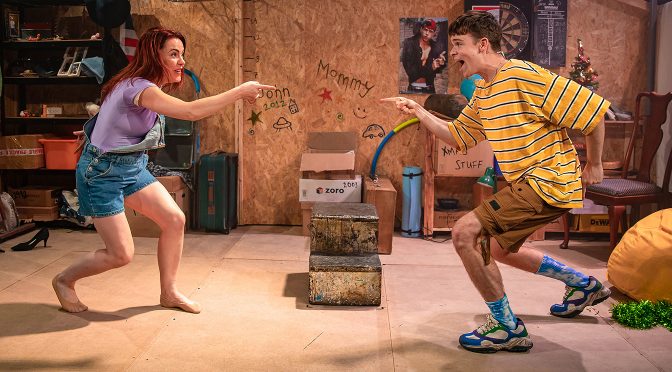 Deceptively simple and slow burning, the cumulative power of Andrew Lippa and Tom Greenwald’s musical benefits from Guy Retallack’s direction in this strong revival. The production is clear about the show’s complexity and the performances, from Rachel Tucker and Lewis Cornay, are full of fire.

John & Jen is a family drama with a novel structure – the second act is a nice twist if you are new to the piece. Suffice to say that we follow characters through different ages and stages of their relationships. It’s a gift for Tucker and Cornay, who portray their roles from toddlers to teens and adults to remarkable effect, and not least with their singing. To express such different ages while always sounding great is a very special skill.

Greenwald and Lippa’s book tackles plenty. There’s the usual coming-of-age angle as well as politics that point to cultural divides, domestic abuse and toxic masculinity. It should be too much. But Retallack’s strategy is a light touch that makes interpretation surprisingly open. Picking a major concern is deliberately tricky – down to each member of the audience. The clever juggling act seems grown up to me – again, aided by Tucker and Cornay’s acting talent.

Smart stuff, then, but sometimes cold? Though you warm to the characters, and the short scenes showing changes in their relationship ring true, the show is tricky to love. The level of accomplished professionalism – clear in Lippa’s score and Greenwald’s lyrics – lacks inspiration. There’s a hint of careful manipulation, albeit effectively employed, with refrains that come back to haunt or lines repeated with a sting. And there’s a saccharine streak that two or three funny numbers do not balance out. Tucker and Cornay are strong comedians, too – I really can’t praise them enough – but, despite a few laughs, the overall effect is soppy.

While there is plenty of detailed Americana, a sense of specific place is lacking. Presumably, Lippa and Greenwald wanted to make the show resonate with a large audience. But for British viewers I’m betting the attraction for this production will come with the performances.  Seeing West End stars Tucker and Cornay in the small space at Southwark is a huge treat. Both add an impressive weight to the score with powerful voices that intoxicate (the singing is sometimes more impressive than the songs). Along with superb musical direction from Chris Ma, the show sounds simply fantastic. Five-star performances in a four-star musical but, without doubt, a show to see.