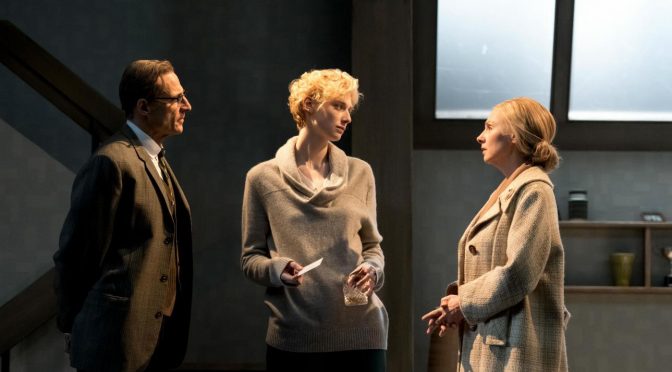 I am happily reading Penguin’s reissue of George Simenon’s Maigret novels, so David Hare’s adaptation of a stand-alone novel from the great author offers the chance to branch out from brilliant detective stories into a psychological thriller of a different kind. Hare’s adaptation is accomplished. Moving away from the book’s first-person narration, which details the mental breakdown of a successful lawyer, here we have a superb ménage à trois of lawyer, wife and mistress that’s better suited to the stage.

As for the production’s dressing – it is truly impeccable. Given that Simenon was concerned more with clarity than any modishness, the 1960s nostalgia goes possibly too far here. Robert Icke directs with a strong cinematic feel, creating cool that isn’t out of place… but feels almost fetishised. The stage curtains slide – up and down, left and right – creating apertures for us. With astonishing rapidity, we are taken to the different scenes of Bunny Christie’s meticulous set – homey farm, glam penthouse – and it’s a real technical achievement. Icke feels the need for a camera’s speed, which is a slight shame with a story this good, but there’s no doubt the show is gripping and the ending a real shock. No quibbles either with the soundtrack, a subtle masterpiece by Tom Gibbons that gets you slowly sliding to the edge of your seat.

The cast is stellar. Mark Strong leads, convincing us that his character, Donald Dodd, was once a decent man. It’s a single event, almost whimsical – when no effort is made to save a friend lost in a blizzard – that changes everything. The subsequent turmoil feels real and, impressively, is never overplayed. And Dodd’s pent-up frustration is more than sexual, an important point that Icke preserves throughout. By the by, Strong’s wig is superb.

Hope Davis plays Ingrid, the “serene” wife, whose husband’s paranoia makes her all-seeing. Davis skilfully brings out Ingrid’s intelligence without making her seem too cold, portraying the occasional moment of frankness with subtlety. Donald’s affair is with his former friend’s wife, Mona, played by Elizabeth Debicki, who also gets the chance to reveal layers of a character that comes to fascinate. Determined not to play the “weeping widows”, at a couple of points it’s Ingrid and Mona’s relationship that excites most. It’s with the two women in the piece that Hare makes his mark, doing justice to Simenon’s skills and creating a theatrical piece worthy of his name.