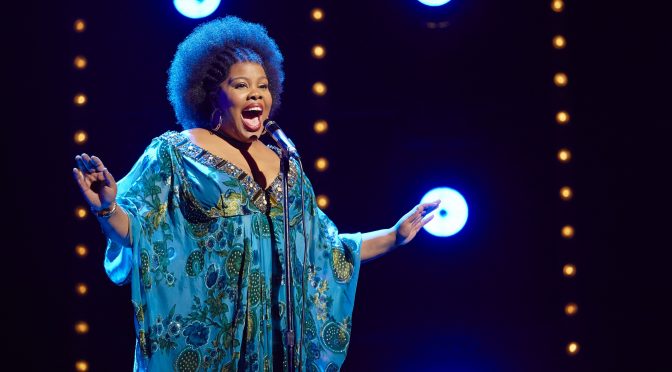 This 1981 Broadway hit, with book and lyrics by Tom Eyen and music from Henry Krieger, reached movie screens before the London stage, so theatregoers have had to be patient. But it has been worth the wait. The story of a Motown girl group, and their trials in show business, its cast’s superb voices mean that from the first talent contest there’s no doubt fame will arrive for The Dreamettes. As the focus becomes the trio’s personal lives, with professional betrayals and broken relationships, powerful songs guarantee strong emotion.

Liisi LaFontaine plays Deena, the shy girl chosen to lead the band into stardom. She sounds fantastic and her acting is adroit. Asmeret Ghebremichael is Lorrell, another member of the group, who holds her own providing a welcome comic number, Ain’t No Party. Lorrell’s affair with the star the girls used to sing backing vocals for – played by the multi-talented Adam J Bernard – is strong in its own right.

The bigger story is the love triangle between Deena, the band’s manager Curtis (performed with a slick edge by Joe Aaron Reid), and Effie, jilted in love and abandoned by the band. And it’s all about Effie. Taking the role of this complex character, Glee star Amber Riley has the audience on its feet more than once. Her powerful voice brings goose bumps – do take the chance to hear her – but big credit also goes to her acting.

The music tells the simple story in a satisfyingly layered manner. Even weaker numbers, examples of cynicism rather than soul through the machinations of Curtis, reflect and comment on the characters’ lives. With the development of R&B into disco (again, blame the manager) variety is built in. It’s an accomplished musical history, aided by Gregg Barnes’ costume design, with a riot of sequins guiding us through the years and illustrating how to really wear a feather boa… if you didn’t already know.

But it’s the women rather than some calculated social history who bring this dream to life. Brilliant performances, packaged by Casey Nicholaw’s direction and choreography affording speed and immediacy, make the success, struggle and reconciliation both uplifting and entertaining.