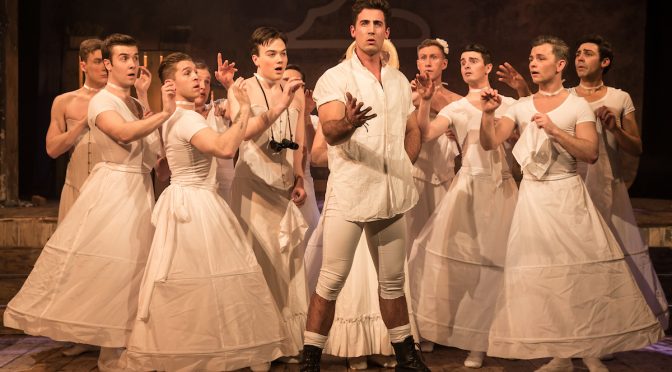 Sasha Regan’s all-male productions of Gilbert and Sullivan’s operettas are truly special. Starting at the Union Theatre a decade ago, receiving rave reviews from the beginning, the greatest success – so far – has been this comedy romance of sweet corsairs, beautiful sisters and bumbling authority figures. Having toured the world #PiratesIsBack returns to what must be the perfect venue for this five-star show.

So, what’s so great? While clever cynicism on stage is common, increasingly so with musicals, and is present here, Regan brings back an innocence that is enchanting. There’s nothing infantile about the show – Gilbert’s lyrics show a master of sarcasm and irony, while the class consciousness that he parodied in 1879, and throughout his career, makes him seem forward thinking. For all the childish fun, Gilbert takes a grown-up look at how silly the world is. Some 140 years later, Regan understands that. Look at the famous Major General role – pompous as ever, yet still endearing in David McKechnie’s fantastic interpretation. Or the lamenting policeman, led magnificently by Duncan Sandilands, getting a lot of laughs but also a touch of sympathy. And best of all the “Piratical Maid of all work” Ruth, a role that Alan Richardson, fresh from success in the West End – whose voice is truly sublime – saves from any trace of distasteful sexism with a performance that is as sensitive and empowering as it is funny.

Then there is a romance in the piece, a peculiar kind that feels out of time. This is, after all, a fairy-book story of love at first sight, no matter how tongue in cheek. James Thackeray masters the blend as the Pirate King who is sensitive yet still dashing and sure to steal hearts. The gallant Frederic and charming Mabel are made a gorgeous couple by Tom Senior and Tom Bales respectively. Senior actually manages to make you admire the character’s silly sense of duty. There’s a real sense of tenderness here that might very well bring a tear to your eye. Regan takes the love story seriously, no matter how old-fashioned the sentimentality, in a necessary leap of faith that allows it to work as theatre.

The stars are backed by a fantastic ensemble, with a real sense of camaraderie that must surely be credited to Regan. Their first switch from pirates to girls, giggling around the balcony, is divine. The air is one of improvisation, a sense of dressing up for fun with wooden swords and a broom for a horse, that takes us back to the basics of theatre. The rough-and-ready aesthetic of Wilton’s Music Hall complements this, as well as serving the acoustics brilliantly. All this belies the skill behind a top-notch production: Lizzi Gee’s ambitious choreography, the expert musical direction from Richard Baker (that transforms Sullivan’s orchestral score so perfectly) and Regan’s never-failing eye for detail. A lot of work goes into creating something that feels this spontaneous, that has such a sense of effortless energy, and the result is a joy that is contagious.