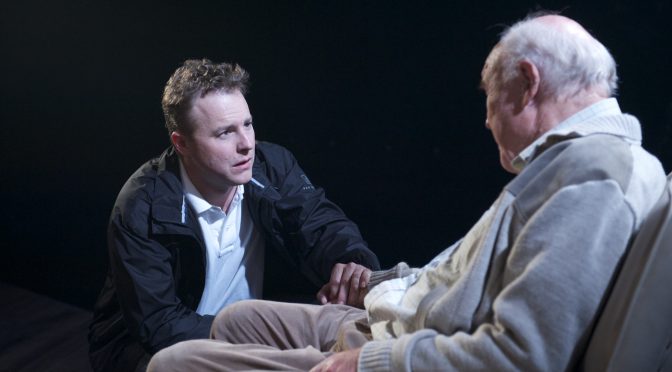 How would you feel if you discovered you had been cloned? Caryl Churchill’s A Number asks this question, focusing on the philosophy of identity, and twisting, like a strand of DNA, between the reactions of children who discover they are clones and the motives of a parent who allowed it to happen.

Jonathan Munby’s minimalist production strips the less than hour-long play down to its essentials, with two protagonists facing each other, strategically placed, and in constant confrontation. Paul Wills’ design invokes the science fiction motif.

The Menier has achieved the considerable coup of securing Timothy West and his son Samuel to work on the play again – they first appeared in it in Sheffield a decade ago. Both performances are impeccable. West senior skilfully reveals his character’s darker side while junior gets to play three cloned versions of himself with terrific subtlety.

The Wests deal with the staccato writing and complex rhythms expertly but the text seems forced and becomes annoying. While you can’t fault Churchill’s ambition or doubt her vigour, there simply isn’t enough of this play to make it work. With so much to develop, the final scene disappoints.

Leaving the audience wanting more seems a risky strategy for a playwright. The early finish has its benefits – you will have plenty to discuss in the Menier’s lovely bar – but it does little justice to the talent involved in this production that they ultimately only serve as the opening speakers in a barroom episode of The Moral Maze.

Written 5 October 2010 for The London Magazine