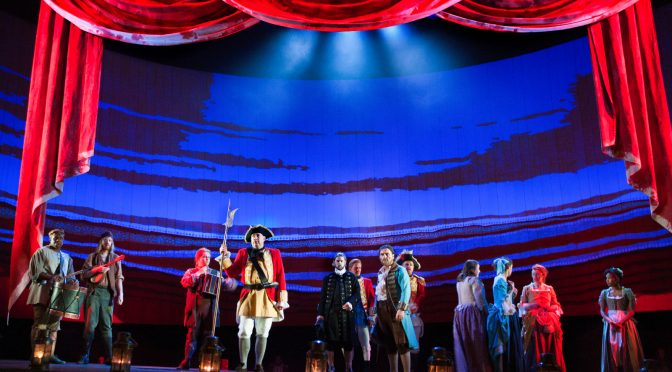 An undisputed modern classic, Timberlake Wertenbaker’s play explores politics, power and the potential of theatre. Its setting is an 18th-century Australian penal colony, its performers, newly arrived convicts who stage a play. It is a text to spend time with and Nadia Fall’s revival presents the ideas with great clarity. But it should also be a work that entertains and invigorates, and, here, this production lacks consistency.

The show looks great, with Peter McKintosh’s design a mix of Aboriginal art and Anish Kapoor, creating a sense of heat and tension. But this show is a cold affair, distinctly lacking humour and failing to exploit the text’s many ironies. Fall’s pacing slows and rushes – possibly because so much music is introduced. Cerys Matthews, making her theatrical debut as a composer, creates a diverse soundscape with snatches of songs you never hear enough of to enjoy.

There are credible performances from the lead: Jason Hughes plays the soldier tasked with directing the convicts and Caoilfhionn Dunne is the prisoner who becomes his leading lady. It’s a shame there isn’t more sexual tension between their characters – an element missing throughout the show which could have added considerable drama.

Productions often have actors doubling up roles to perform as both guard and prisoner – Fall has a larger crew but the play doesn’t benefit from bigger numbers. Disappointingly, with some of the cast, there is a sense of fighting for attention that should have been checked. The actors that do stand out give the most generous and controlled performances: Ashley McGuire’s down-to-earth Dabby Bryant and Peter Forbes’ bullish Major.

The later acts are better; the violence in the colony is bravely depicted and that raises the stakes. But what might have countered this brutality – camaraderie between the players and what little joy their common humanity affords them – isn’t given its proper place. That the show goes on and the prisoners perform doesn’t leave us as elated as it should. 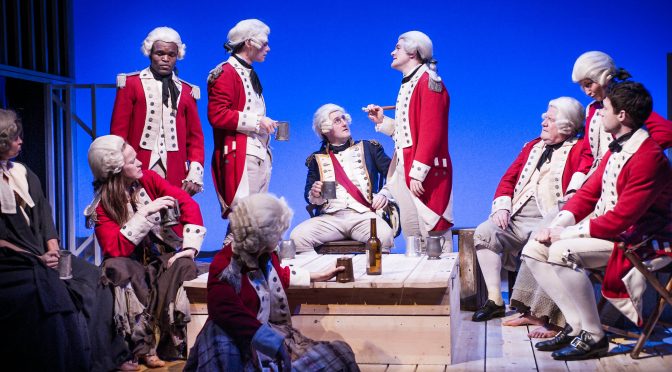